Nalice is a black dragon found at Wyrmrest Temple and later in the Master's Cellar of Deadwind Pass.

During the Nexus War and the War against the Lich King Nalice was the black dragonflight's envoy to Alexstrasza's organization, The Wyrmrest Accord. She was located in the queen's chamber at the top of the temple sending adventurers to Serinar to help him defend the Obsidian Dragonshrine from the scourge.

In the wake of Deathwing's reemergence and his shattering of Azeroth, Nalice has mysteriously disappeared from Wyrmrest Temple.[1]

Nalice hid with her Blackwyrm Cult in the Master's Cellar beneath Karazhan, Medivh's former home and one of the most powerful magical locations on Azeroth, researching arcane secrets buried beneath the foundation to perform some sort of arcane experiments. In

[85] Blood of the Betrayer, rogues seeking to gain the [Fangs of the Father] are tasked with going to Karazhan, linking up with Wrathion's agent, then killing Nalice and obtaining a vial of her blood. 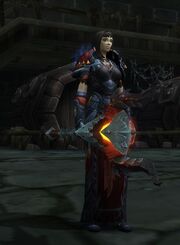 Does being in the presence of a Black Dragon make you nervous?

Good. It should. It makes these dragons nervous too. They cling to their ancient virtues though - they wouldn't dare attack me here.