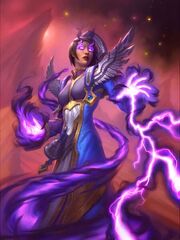 Natalie Seline was a bishop from Stormwind that, after the First War, began to delve into workings of the orc necrolytes who had poured through the Dark Portal and desecrated their hallowed dead. While at first this was done in order to provide Azeroth with the knowledge it needed to fight against such dark magic, her studies over the years became increasingly obsessed with finding out why such dark energies existed at all, and why she began to see the ebb and flow of such energies in the world around her. She began preaching about the necessity of balance between dark and light, but after her death, her books were locked away in the Kirin Tor's vaults in Dalaran.[1]

She was once the owner of

[Xal'atath, Blade of the Black Empire], which was one of the sources that gave her the dark secrets she used in writing

[Secrets of the Void].

Natalie was once a bishop. She had lived through the First War, when the orcish Horde invaded Azeroth and conquered Stormwind. After the war, Seline realized that to defeat the green-skinned orcs, humanity would need to study the strange powers they wielded. She closely examined their magics, and she visited battle sites where their dark arts had befouled the land. From her investigations, she learned of an otherworldly blade that the orcs had once used in their bloody rituals-a blade that held sway over the shadows themselves. Troubled that such a profane weapon could exist, Seline swore to hunt it down and destroy it in the name of the Light.

The moment she touched the blade, a name was spoken in her mind: Xal'atath. She knew then that she could not destroy the dagger. Not yet. How can one defeat a power she does not understand? Xal'atath whispered to her in waking and in dreaming. It taught her that there was more to this world than Light, there was also Void. In the ebb and flow between these two forces, one can find power and knowledge beyond anything the Church of the Holy Light has ever revealed to its followers. One can cross the divide between Light and Void. One can pull strands from each side and weave a tapestry of day and night.

By the time of the Second War, Natalie Seline had learned how to wield shadow magic from Xal'atath. She had taught her dangerous arts to other worshipers of the Light and rallied them against the Horde. Seline and her followers waged their war in secret, hunting down orcs across the human kingdoms. Xal'atath continued whispering in Seline's mind, slowly unraveling her sanity. Despite her noble intentions, she became more and more obsessed with the blade and the mysteries of the Void.

And so did Seline's companions. They were overzealous in their campaign against the orcs, putting innocent lives at risk. Some strayed too far into shadow, forsaking the Light completely. Though Seline urged her followers to use caution, her calls were ignored and even treated with suspicion.

It is unclear exactly what happened to the former bishop, but some sources state that Xal'atath incited rebellion among her allies. It convinced them that Seline was holding them back from their true potential--holding back knowledge and power that they could have if they killed her. In the dead of night, the conspirators murdered Seline and then took Xal'atath for themselves.[2]

For years, the Kirin Tor magi in Dalaran had watched Natalie Seline, greatly troubled by her dark teachings. After her death, they set out to scour her writings from history. Magi picked through the villages and cities Seline had traveled, gathering up every scroll and tome that she had penned. The Kirin Tor hid these writings in Dalaran, hoping that would be the end of Seline's dangerous brand of magic. Yet despite their efforts, they could not bury the doctrine of balance she had preached. In the years to come, others would take up her teachings and devote themselves to the Light and the Void. The magi also knew of Xal'atath, but they never found it. Like Seline's teachings, the blade would not simply fade away.[2]

The Cult of the Forgotten Shadow was created through the rediscovery of her teachings by Forsaken priests in Lordaeron after the capture and refurbishing of the Undercity.[1]

Most believe Natalie was murdered for her beliefs, but the truth was she knew her fate and took steps to protect herself from an inevitable death. The night her attackers came Natalie sent her spirit into the Void, its location known only to her. She penned a spell to retrieve it in one of her many journals. Unfortunately, the tome eventually fell into the hands of those who wanted her dead in the first place. Her body was buried at Raven Hill Cemetery in Duskwood, where members of the Cult of Forgotten Shadows stayed, forever hopeful her spirit would return.[3]

When the Conclave wanted to restore the Cult of Forgotten Shadows so it would join them at Netherlight Temple, Twilight Lord Urgrok was killed and the journal taken from him.[3] After performing the ritual in Dawning Wood Catacombs and delving into the Void themselves, the High Priest of the Conclave retrieved Natalie's spirit and freed it from the weight of the darkness.[4] While Natalie could not deny part of her wished to stay embraced by the shadows, she acknowledged that the Void held many whispers that should have everyone worried. Agreeing to unite as priests of both Light and Shadow to face the Burning Legion together, Natalie and the cultists traveled to Netherlight Temple.[5] News of Natalie's return would quickly spread fast among those who shared her beliefs, and soon Azeroth would see the rise of the Cult of Forgotten Shadows.[6]

Main article: Into the Void#Notes