“This one was an odd place, a collection of rocks imbued with potent magic, floating amid the infinite void of the Twisting Nether. A tiny sun orbited it every few minutes. Dozens of miniature glowing moons followed it. Bits of rock floated in the air, held aloft by the power of magic. Potent energies saturated this place, were sunk into the very fabric of the world, and they were not the only things here. In the distance, amid the rocks, he sensed the presence of demons of a very specific sort: nathrezim.”

Nathreza is the homeworld of the demonic nathrezim, more commonly known as dreadlords, one of the first species to join the Burning Legion. It is described as being a collection of rocks suffused with powerful magics, adrift in the Twisting Nether,[2] the astral plane between worlds.[3] It possesses at least one small sun as well as numerous small moons. Bits of rock float through the air, held aloft by magic, and green light blazes from the landscape's rock, as well as from the planet's sun. There is known to exist at least one city on Nathreza, made of basalt towers and illuminated by the flare of green fel lanterns, with black discs running up the sides of its buildings. In the center of the city sits a massive windowless tower with green runes lighting up its sides. The planetoid itself is carved from pure magical energy congealed into pulsing chromatic stone.[4]

Within the city's tower sits the most prized possession of the nathrezim: a room of archives containing knowledge on every triumph, every conquest, every campaign, and every plot that was ever orchestrated in the name of the Burning Legion. Composed of towers of obsidian discs arranged chronologically, the archive contains information on all the races and planets the Legion has encountered and constitutes a monument of pride for the dreadlords.[citation needed]  The primary language of Nathreza is the dreadlords' own tongue, which is rarely used outside their homeworld. Ultimately, many details of Nathreza remain unknown, it being highly uncommon for any outside the Legion to lay eyes upon it.[5]

Illidan Stormrage recently mounted an attack on Nathreza and collapsed the portal that he used to return to Outland, which he believed would cause cataclysmic damage to the planet akin to the portals that shattered Draenor into Outland.[6] This seems to have worked as when Portal Keeper Hasabel opened a portal to Nathreza, she described it as "once a world of magic and knowledge, now a twisted landscape from which none escape". Since Nathreza is located in the Twisting Nether, any demon that was slain on Nathreza would have died permanently. 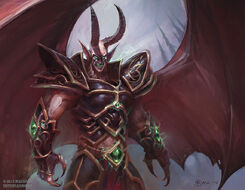 A nathrezim, native inhabitants of Nathreza.

This section concerns content related to the World of Warcraft: Illidan novel.

Just before the outbreak of the invasion of Outland, Illidan Stormrage, the new Lord of Outland, put his plans in motion to launch an assault on the dreadlords' homeworld. Having spiritually visited Nathreza through a complex ritual he conducted, Illidan was able to discern the planet's location in the vastness of the Twisting Nether. Soon afterwards, having sprung a trap on the warden Maiev Shadowsong and her forces at the Hand of Gul'dan in Shadowmoon Valley, Illidan used the souls of the slain—including his own soldiers'—to fuel a portal of seismic proportions.

Illidan ordered his massed demon hunters through the portal and, upon reaching the other side, the force found itself on Nathreza. Engaging an army of demonic defenders containing many nathrezim, Illidan's forces quickly routed and slaughtered them, despite possessing much smaller numbers. The Illidari pressed on to the nearby nathrezim city, fighting more demons to reach the entrance to the archives. Illidan breached the tower and, with several of his most trusted in tow, descended to the room of records. After fighting back Legion reinforcements, the Betrayer hastened to seize his objective, the Seal of Argus, realizing that time was of the essence. After this, his force retreated to the portal back to Outland and retreated through it, fighting off more demons. Once all were through, Illidan collapsed the portal; by his calculations, this should have caused such damage to Nathreza as to shatter the planet in the same fashion as Draenor.[7] Indeed, shortly after the portal closed, Nathreza blew apart. Every demon on its surface perished.[8]

Before leaving Nathreza's vast archives, Illidan made a point of damaging the majority of its discs, ruining the dreadlords' most cherished monument. The disc which he had recovered, the Seal of Argus, was revealed to be the record of the Legion's actions on the planet Argus, containing its location, which Illidan intended to use in his future plans.

The Kirin Tor learned that the Mal'Ganis of the past left behind an artifact from Nathreza in the Culling of Stratholme, and sent agents to retrieve it.[9]

Years later when the forces of Azeroth attacked Argus, Portal Keeper Hasabel opened portals to various Legion-dominated worlds, including Nathreza, implying that part of it survived, probably in a manner akin to Outland. Hasabel describes Nathreza as "once a world of magic and knowledge, now a twisted landscape from which none escape".