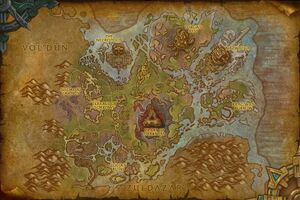 is an underground catacomb found under the Necropolis in Nazmir. It can be accessed from three entrances in the Court of Spirits. One side has Za'amar the Queen's Blade who protects the remains of a nameless queen, another side has Gee'dae the Cursed is trying to corrupt Valjabu, and the final side is cluttered by Reanimated Horrors.