Not to be confused with Deathwing's Lair.

Neltharion's Lair is the cavern located in Highmountain, southeast of Thunder Totem. It was here where Neltharion lived before he became Deathwing.[1] Class leaders ventured inside to recover the

[Hammer of Khaz'goroth] stolen by Dargrul the Underking.[2] The entrance is at Snowblind Mesa [50, 68] 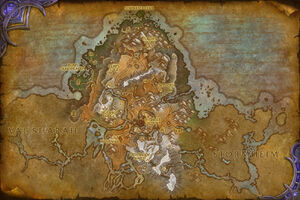 - a short walk East up the hill from the cliffs behind Thunder Totem. The dragon-sized entrance is Neltharion's Vault.

The exit (up a path to the right of the last boss, Dargul, marked by torches) takes you to The Bartering Cave behind Spiritwatch Point. A fake portal that Dargrul destroys can be found at Understone Breach. Note that this is the only exit route for Mythic dungeons, other than leaving the group and then being re-invited, to get repairs done without an

The cave was where the great dragon Neltharion resided before becoming Deathwing, though he was not the first, for another empowered black dragon resided here before.[3] In his fury, Deathwing slew many of his kin there, leaving their bones to decay.[4]

The Earth Warder Neltharion, later known as Deathwing, once called this cavern home. Since his fall, the drogbar that once worshipped the great dragon built their capital within this ancient lair. Now, Dargrul, chieftain of the drogbar, rallies a massive army within these depths. Bolstered by the Hammer of Khaz'goroth, this army will surge from the mountainside if left unchecked, devastating Highmountain and threatening the security of all Azeroth.

In order to empower the Heart of Azeroth with the essence of the Dragon Aspects, adventurers had to travel there with Spiritwalker Ebonhorn.[4] Because of Azerite eruption, the lingering power of the black dragonflight awoke many earth elementals who started fighting anything they could see, killing several Stonedark watchers. Ma'haat the Indomitable, a stone lord from Deepholm, was here to retrieve the dragonflight's essence.[5]

Neltharion, better known as Deathwing, once called these caves home. Since his fall, the drogbar that once worshipped the great dragon built their capitol within this ancient lair. Now, Dargrul, chieftain of the drogbar, rallies a massive army within these depths. If left unchecked, the mad king's army will surge from the mountainside, devastating Highmountain and all of Azeroth with it.