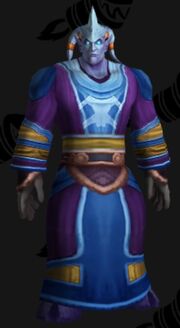 Nemuraan was one of the survivors of the war between the orcs and the draenei and loathed the orcs bitterly. He and a group of surviving draenei took refuge in the halls of Auchindoun.

He later discovered Grizzik, an arakkoa leading a group of new creatures he had never seen before. Nemuraan demanded an explanation for the intrusion and used his powers to learn the new comers' language. Their leader Danath Trollbane explained that they were an alliance of races from another world and have come to end the orcish threat. After some considering, Nemuraan believed them though he was still unwilling to show his people's hideout and offered to aid the Alliance forces in freeing their friend Kurdran Wildhammer by summoning Boulestraan and the ghosts of the draenei army that had fallen during the war. He was at first worried about upsetting his new allies but they readily agreed to his delight. Their combined forces stormed Auchindoun and rescued the dwarf, but he was badly wounded.

Using his Light-given powers, the priest healed Kurdran. Following their victory, Danath offered Nemuraan and his people to return to Azeroth but the draenei declined, stating that their place was in Draenor. He wished his new friends farewell and luck in defeating the orcs. He also stated that his people and the Alliance would perhaps one day fight alongside each other again against the forces of darkness; this foreshadows the draenei joining the Grand Alliance.[1]