The Netherwing is the main faction of the netherwing dragonflight in Outland.

Although generally hostile to most humanoids based on their treatment by the Dragonmaw clan of orcs in Shadowmoon Valley, they can be swayed to change their attitude if tasks to aid them are completed.

This unusual brood of dragons was spawned from the eggs of Deathwing's black dragonflight, and infused with raw nether-energies. Now, they seek to find their identity beyond the shadows of their father's destructive heritage.

You can start these quests at level 70 with Expert Riding (normal flying). However, you cannot proceed on the quest chain until you have Artisan Riding (fast flying). At level 80, most of these daily quests reward about 5

, so players may wish to continue repeating them for cash even after reaching exalted.

The quest chain begins by speaking with

Mordenai, who wanders the Netherwing Fields in the southeast corner of Shadowmoon Valley. Mordenai wanders around Netherwing Fields and is often fighting flayers. When he is in combat, the '!' will not be visible, making it harder to find him. To get the quest sooner, just assist him in combat. You will need a flying mount for this chain.

Note: The quests in the Hated-to-Neutral chain are not daily quests. These are one-time-only quests that upon completion bring your reputation with the Netherwing up from hated to neutral. It is not possible to start the daily quests before this entire chain is completed. 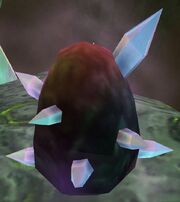 The questline resumes by speaking with Mordenai, 300 riding skill and a flying mount are required to continue. Players who accept the introduction quest have Mordenai use the Dragonflight's magic on them to appear as a fel orc riding a nether drake while in the vicinity of Dragonmaw Fortress and Netherwing Ledge. This makes all fel orcs in the region excluding Dragonmaw Ascendants, Dragonmaw Skybreakers and Dragonmaw Transporters appear friendly to the player. The fake mount provides the same speed bonus as the real thing, giving a nice preview of what all the hard work is for.

Players who do not have at least one gathering profession will be unable to complete the gathering based daily quests and so are at a slight disadvantage to players who do have a gathering skill. The Black Blood of Draenor mob found within the nearby mines drops

[Sludge-Covered Object] that has a chance to contain any of the gathered items, but without a gathering profession, the related quests do not appear.

Players receive a trinket that summons a combat pet while in Shadowmoon valley and open up an additional 3 daily quests. Earlier repeatable quests are still available.

Players receive an upgraded trinket, allowing them to summon a combat pet in all zones. All previous repeatable quests are still available and another daily quest as well as the Dragonmaw Races become available.

Players receive yet another upgrade to the trinket, this time adding 45 stamina, and open up a daily group quest. All earlier repeatable quests are still available. The questline after Hail, Commander! depends on which of the Shattrath City factions players are allied with.

Choosing a Nether Drake mount in the Lower City.

Players may then talk with the six Netherwing drakes standing next to Barthamus in the Lower City of Shattrath. The mount rewarded depends on which drake the player talks to:

It is not possible to choose the exact color drake which is used for the mounted Fel Orc costume; it is a combination of the Cobalt, Purple, and Violet color choices. However, all drakes will change into this special coloration upon entering Netherwing Ledge thereafter.

A few quests become available from items that drop from mobs on the island.

Starting at neutral after completing

[70] Enter the Taskmaster, Arvoar the Rapacious will drop the [Partially Digested Hand] as loot, which starts the quest

The Black Blood of Draenors and Draenor Blood Terrors in the Netherwing Mines drop [Sludge-Covered Objects]. Starting at friendly reputation after completing

[70] The Netherwing Mines, opening these may reveal the [Murkblood Escape Plans]. This item leads to the following questline:

Players begin at 0/36000 hated with Netherwing, and must be exalted to obtain a Nether Drake mount. The quest chain/reputation grind is a mostly solo endeavor involving daily quests, one 5-person group quest on the way to neutral, and a daily 3-person group quest once reaching revered. A flying mount is required for this reputation grind, and 300 riding skill is necessary to advance past neutral. Netherwing is one of the only factions in the game where players do not lose reputation by attacking and killing its members.

Ignoring both the egg quest and the human racial reputation bonus, the fastest reputation progression possible by completing the daily quests is:

[70] Accepting All Eggs can significantly reduce the total number of days needed to reach exalted. Some have reported getting there in three to four days.

Since the end of Burning Crusade, there are far fewer people doing these quests, resulting in far more eggs lying around, making it that much easier to get exalted.

Drake Dealer Hurlunk sells additional Nether Drake mounts to players who are exalted with the Netherwing at the Dragonmaw Base Camp. (These prices are at exalted status, you do not get a further discount from the listed 200