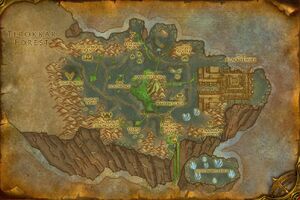 is a huge floating island in southeastern Shadowmoon Valley. It is populated by Dragonmaw fel orcs and their nether drake slaves.

This land was once held by the Netherwing dragonflight and used it as a breeding area. They kept the Overmine rock flayers, that also inhabitant the area, in check. However, since the nether dragons were run off by the fel orcs, the rock flayers now run rampant.[1] The magic of the Netherwing however is still strong here.[2]

The area was called "an Alex Afrasiabi special" by Cory Stockton on Twitter.[3]