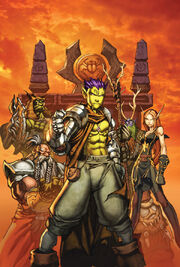 It was formed before the events of Wrath of the Lich King to deal with Cho'Gall and his masters because the armies of Azeroth were focused on Northrend and the Scourge, the threat may not have been something an army could have dealt with and it could have required magical intervention.

The decision to reform the Council of Tirisfal was made by a group of three people at Theramore Isle after Med'an was rescued from Cho'gall: Aegwynn, Jaina Proudmoore, and Meryl Winterstorm. They also planned to recruit Maraad, Khadgar, Broll Bearmantle, and Thrall; with Malygos's actions hampering arcane magic across the world, it was decided that they would need to include practitioners of divine and nature magic as well, such as the dwarven High Priest, Rohan; the gnome, Krank Axeljink; and the tauren Archdruid, Hamuul Runetotem.[3] Thrall and Khadgar declined, but appointed Rehgar Earthfury and Dalynnia Wrathscar respectively to serve on the council in their stead.

Unfortunately, the new Council didn't prove to be as binding as the original, and most of its members went their separate ways after Cho'gall's defeat. As for Med'an, he returned the Guardian power to the Council.[4][5] No one has seen him since Maraad returned to the Exodar, and it is believed he may have left for another world to continue his training.[1] The Council never chose a new Guardian.[6]

With most of their members having either died or joined different organizations, and Khadgar having forbidden of the creation of a new Guardian, it is unlikely that the Council will ever reform.