This article is about the lore of the Nexus. For the instanced dungeon, see Nexus (instance).

The Nexus is the ancient fortress of the blue dragonflight, found in the center of Coldarra in Northrend. With a network of ice caves underneath, a great column of magical energy bursts from its center, surrounded by levitating rings of land.[1]

The Nexus is a dungeon in Northrend contained in the World of Warcraft: Wrath of the Lich King expansion. To enter the instance before level 77 players must first do a quest line for a red dragon who then flies you to the entrance.[2] There is composed of:

6,000 BDP, a group of Shandaral Highborne sorcerers infiltrated the Nexus in order to learn their secrets about magic. The Highborne succeeded in learning the dragons' techniques, but their greed drove them into stealing some powerful artifacts. As they did so, the elves triggered magical wards, sending the blue dragons into frenzy. The Highborne thieves managed to escape the lair, but soon the dragons' retribution came to Shandaral.[3]

At some point, while manipulating the fabric of reality, the wise and mirthful blue dragons tapped into another realm of existence and made contact with the strange arcane entity called Aluneth. They were so intrigued by Aluneth's existence that they summoned the entity into the world for further study. Aluneth immediately went on a rampage through the blue dragons' lair, the Nexus. The arcane presence destroyed countless rare artifacts and tomes of power before finally being contained. The dragons were not angry about what had happened--they were delighted by Aluneth's capricious nature. After years of conducting harmless experiments on Aluneth, the blue dragons satisfied their curiosity and sent the entity back to its own realm.[4]

[Aluneth] that bound the entity to the Kirin Tor who stored it in the Nexus Vault, guarded by blue dragons.[4]

After the Second War, Korialstrasz of the red dragonflight visited Malygos' sanctum. There he saw frozen corpses of ice trolls, wendigos, orcs, an elf, and even naga that had been left there by the dragon.[5] 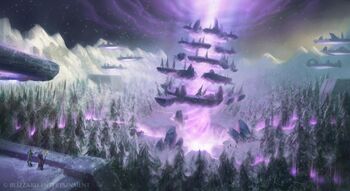 After the reopening of the Dark Portal, the blue dragon Tyrygosa brought Zzeraku and other nether dragons to the Nexus in order for them to recuperate through its energies. However, the Nexus' power was so great that they decided to claim the Nexus for themselves. They started to drain all its energy, so they would never be enslaved to the orcs or anyone again. Arygos and the blue dragons intervened to defend the Nexus, but it was Malygos who, after awakening from millennia of seclusion, destroyed the nether dragons and absorbed back their energies. This would restore his sanity[6] and later lead to the events of the Nexus War. 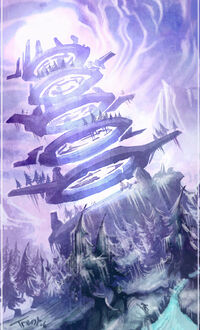 Malygos imprisoned Keristrasza in the Nexus, and it served as a base for the traitorous mage hunters. Directing so much of Azeroth's arcane energy through the Nexus has created tears in reality, spawning arcane anomalies in its halls, and transforming the Singing Gardens and its guardians into crystalline beings. The Nexus sections were breached by the Alliance and Horde forces, and Malygos' dragons and servants defeated. Ultimately, with the help of Alexstrasza, the adventurers killed Malygos.

During the Cataclysm, the Nexus was visited by Thrall. It was also the place where the blue dragons gathered for the Embrace to determine who among Arygos or Kalecgos shall be the next Blue Aspect. When Arygos was revealed to work with Deathwing's minions, alternate Blackmoore entered the Nexus and killed Arygos and used the Focusing Iris to revive Chromatus.[7]

Concept art of the halls of the Nexus

Deciding that the Focusing Iris needed to be placed somewhere safe, a squad of blue dragons tried to escort it from the Eye of Eternity to the depths of Azeroth's ocean. However, agents of the Horde killed the entire squad and stole the artifact. Kalecgos went out searching for it because of his former position as Aspect, but was unable to discover its location until the Focusing Iris was used to empower the mana bomb that destroyed Theramore.

Because of their diminished numbers, first from the War of the Ancients, then the Nexus War, and the Shattering, the blue dragonflight decided to go their separate ways. The few remaining blue dragons have scattered across the world, no longer affiliated with any organization.[8]

Kalec remained behind in the Nexus for some time after the official disbanding of the blue dragonflight, despite having officially joined the Kirin Tor. When he found a lost artifact that had belonged to Tyr at Galakrond's Rest, Kalec brought it back to the Nexus and witnessed painful visions of the Aspects' prehistoric battle with Galakrond.[9]

Kalec has not returned to the Nexus in some time. He sends a priest adventurer there in search of

[Light's Wrath], a dangerous item created by the Scarlet Crusade that the Kirin Tor had entrusted to the blue dragons some time before it was disbanded, and a mage adventurer in search of

[Aluneth], a powerful staff once wielded by Aegwynn. The Nexus has since become the home of ethereals of the Ethereum who seek the blue dragons' treasures. Azuregos, who was at the Nexus to retrieve those same treasures, helps the adventurers stop Nexus-Prince Bilaal. Afterward, Azuregos stays behind to secure the Nexus so it will not fall into the wrong hands again and says to give his regards to Kalecgos.[10]

The Oculus section of the Nexus was being invaded by the Burning Legion before Belgaristrasz, with the help of the adventurer's followers, successfully fended them off.[11]

Kathra'natir uses the power of the Nexus, along with the

[Nightborne Soulstone], to drain Meryl Felstorm. The Tirisgarde attack the Burning Legion and Kathra'natir at the Nexus and trap him within the soulstone.[12]

A group of Kirin Tor mages arrived to the top of the Nexus and assisted Kalecgos with charging a Scale of the Blue Aspect.[13]

Description from the official site

The Nexus War has begun.

The blue Dragon Aspect, Malygos, was charged ages ago by the titans as the guardian of magic. More than ten millennia ago, he watched in horror as Deathwing all but wiped out the blue flight. Maddened by grief, Malygos withdrew to his lair and paid little heed to the rest of the world, emerging only when it finally seemed possible to avenge Deathwing's terrible crime.

Only in recent times did Malygos fully return to his senses. Upon reviving, he quickly assessed the state of magical affairs in Azeroth and reached the grim conclusion that magic was running amok throughout the world. He blamed this dangerous development on the mortal races and their reckless pursuit of magical power.

Determined to forestall a catastrophe, Malygos decreed that the world's unbridled magic must be reined in by any means necessary. And so the great Aspect turned to the Arcanomicon, a map of the world's ley lines. Gifted to Malygos ages ago by the titan Norgannon, the Arcanomicon has been continuously updated and revised by the blue dragons over the long years of Malygos's seclusion.

Now Malygos uses the Arcanomicon to locate and tap into the ley lines, diverting the magical powers that course beneath the earth to his home base in Northrend, the Nexus. Once harnessed, the energies are focused through the Nexus' ascending rings and blasted into the Twisting Nether. Malygos's redirection of the ley lines has carried disastrous consequences, however, splintering the world's crust and opening unstable rifts: tears in the very fabric of the magical dimension.

Malygos' siphoning of the world's magic has not gone unnoticed by the mortal races. The weakening members of the Kirin Tor, the elite magi of Dalaran, have sworn to fight Malygos to the bitter end. In fact, the magi have used their waning powers to transfer the entire city of Dalaran to float above Northrend. From this vantage point, the magi prepare for the next step in their battle against the Lich King, and for the inevitable confrontation with Malygos.

However, not all of the Kirin Tor stand united. Several members have opted to side with the blue dragonflight in the hopes of retaining power. Transformed and bolstered by Malygos, these mage hunters are tasked with rooting out and, if necessary, destroying magical artifacts; killing or imprisoning individuals who practice magic without Malygos' permission; and aiding in the redirection of ley lines using massive constructs called surge needles.

The blue dragonflight's increasingly militaristic methods have been condemned by the red dragonflight. Charged with the preservation of life, the red dragonflight has vowed to neutralize Malygos at all costs. To this end, they have formed a council with the Kirin Tor, and the two groups have begun actively subverting Malygos's devastating campaign.

The sides have been chosen; the battle lines have been drawn. The only question that remains now is... 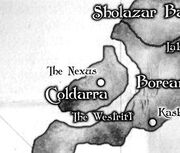 The Nexus in Coldarra in Lands of Mystery.

Originally the Nexus was exclusively Malygos's lair, but has expanded considerably as other blue dragons choose to live near their leader and partake of his wisdom. The Nexus is an extensive series of caves and tunnels that riddles the island of Coldarra.

Every space has been carved and smoothed so that it seems more like a castle buried in ice than a natural formation. The walls are ice and crystal, and cast rainbows of light from small glowing gems set in strategic locations; most flat surfaces are carved to show dragons in various activities. The floors are solid stone, polished glass-smooth and, mirror-bright. No stairs exist — in many places, an archway opens onto a vast open chamber and the dragons simply fly across to another portal placed somewhere on the other side. The outermost chambers are dotted with lifelike ice statues — or so it seems. These statues are the remains of uninvited guests, transformed by dragon magic and placed here as a warning. The caves themselves are fascinating, and many have unusual magical properties. Some of the rooms may actually change.[15]