“It is you reckless, careless mortals who are to blame for this war.
I do what I must, and if it means your extinction.... then SO BE IT!!”

The Nexus War,[1][2] sometimes pluralized as the Nexus Wars,[3][4] was a major conflict fought between a resurgent blue dragonflight and an alliance consisting of the Kirin Tor of Dalaran and the Wyrmrest Accord, occurring concurrently with the War against the Lich King. The war was instigated by Malygos the Spell-Weaver, Aspect of the blue dragonflight and Lord of Magic. Having regained his sanity after many millennia, the Blue Aspect concluded that the mortal races' apparent reckless use of magic was a threat to the stability of Azeroth. As the Guardian of Magic, Malygos subsequently declared war on all whose use of magic he deemed improper, specifically the magocracy of the Kirin Tor.

Eventually, the Wyrmrest Accord—a coalition of the other dragonflights—joined in the fight against Malygos and the blue dragonflight. With the aid of champions from the Alliance and Horde, they were able to successfully prosecute a war against the Spellweaver's forces, ultimately culminating in a battle with, and the death of, Malygos himself. The war caused much strife among the dragonflights and mortal races alike, and ultimately left the blue dragonflight leaderless. Its effects are far-reaching and its consequences can still be seen in Azeroth today.

Prelude to the War 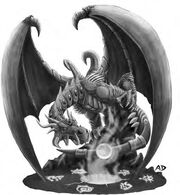 During the War of the Ancients, Malygos and his Blue dragonflight notoriously attempted to stop Neltharion, Dragon Aspect of Earth, when he betrayed the other dragonflights using the Demon Soul artifact. Before the blues could stop him, however, Neltharion—forever after known as Deathwing—used the incredible power contained within the Demon Soul to annihilate virtually the entire Blue dragonflight, Malygos himself being driven away wounded.

Following these events, the Blue Aspect fled to his flight's lair on the continent of Northrend, still reeling from the destruction wrought by the former Earth-Warder. His grief over losing his flight at the hands of one he once considered a close friend drove Malygos into a deep madness. Stewing in regret, he remained hidden and secluded for thousands of years, paying little to no heed to the goings-on in the rest of the world. During this time, he also neglected his duties as Aspect of Magic, no longer monitoring its use throughout Azeroth.

Eventually, the Aspect was coaxed out of seclusion during the Second War and was convinced, by the red dragonflight Korialstrasz, to aid the other Aspects in their battle with Deathwing to once and for all end the corrupting influence of the Demon Soul. Having succeeded, Malygos began to gradually regain his former sanity, greatly helped by the Aspect of Life, Alexstrasza's, promise to help the Blue dragonflight to be reborn, as well as the return of Tyrygosa from Outland with the nether drakes she had liberated in Netherstorm. Their nether-warped physiology greatly helped in Malygos's eventual recovery.[5]

As he became his former self again, the Spellweaver also began to once more survey the state of magical usage throughout the world. He discovered that, during his absence, magic had greatly increased in proficiency and was now running amok. He subsequently placed the blame squarely on the various mortal races that had since arisen on the world during his ten thousand years of seclusion. Seeking a solution, Malygos turned to the Arcanomicon, the map of all of Azeroth's ley lines, granted to him by the Titan Norgannon when he first became an Aspect. Using the map to locate all of the world's ley lines, the Lord of Magic began to divert their energies into his domain—the Nexus—on the island of Coldarra in Northrend's Borean Tundra.[6] They were then channeled through the floating rings of the Nexus and blasted into the Twisting Nether.

What Malygos did not know was how much damage his plan would wreak if implemented fully. While the Pantheon had told the Dragon Aspects many things, what they did not tell them was that Azeroth held a world-soul, a dormant titan. Malygos's campaign had upset the equilibrium of the world, sparking natural disasters from Northrend to the southern tips of Kalimdor and the Eastern Kingdoms. Unless something was done, these disasters would spiral out of control and cause irreparable harm to Azeroth's world-soul.[7]

The battle lines are drawn 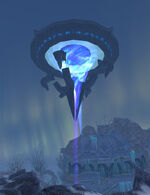 A surge needle hovering above Dragonblight.

Malygos's actions led to rifts opening in the fabric of magic itself. His siphoning of the world's magic also did not escape the notice of the mortal races - particularly the remnants of the Kirin Tor, the elite magi of Dalaran. Recognising that Malygos had become a very real threat, the Kirin Tor used what remaining powers they had to magically transport the rebuilt city of Dalaran to the skies of Northrend, right on the front lines of both the War against the Lich King, and the coming conflict with Malygos.

However, some members of the Kirin Tor believed that allying themselves with the Guardian of Magic would be more beneficial and prudent. Betraying their own brethren, many of these mages were transformed and bolstered by Malygos himself to become the dreaded mage hunters. Their duties now became killing or capturing those who wielded magic without Malygos's consent, destroying specific magical artifacts, and aiding in the redirection of ley lines using surge needles.

As the war began to pick up, Malygos's genocidal campaign began to incur the ire of its former allies, the Red dragonflight, charged by the Titans to preserve life. Alexstrasza, the Red Aspect, subsequently allied her dragonflight with the mages of the Kirin Tor in their efforts against the blues. Along with the Red flight, the entire Wyrmrest Accord decided to unite with those opposing the Spellweaver, bringing the Green, Bronze, and Black dragonflights into the conflict.

Also threatened by the Blue dragonflight's actions, Alliance and Horde aligned themselves with the Kirin Tor and its allies. Champions of these two proved pivotal in the eventual frustration of Malygos's plans in the Borean Tundra and Dragonblight. At some point during the conflict, the Ethereum, an organization of militant ethereals, negotiated a deal with Malygos, whereby they would aid the Blue dragonflight in the war in exchange for a promise to be allowed access to the flight's powerful treasures.[8]

End of the Nexus War 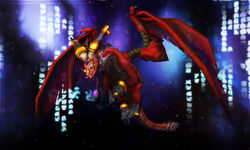 Throughout the brutal conflict, the Blue dragonflight battled with its enemies in the western regions of Northrend, eventually failing to overcome the coalition arrayed against them. The final blow against Malygos's forces was struck be members of the Horde and Alliance. Upon the defeat of the frost wyrm Sapphiron in the heart of Naxxramas, its key to the Focusing Iris in the Eye of Eternity (Malygos's inner sanctum) was recovered.[9] The key was promptly delivered to Alexstrasza herself, who imbued it with her power, recognising this as an opportunity to lure Malygos into battle. With the power of the Aspect of Life, it could now be used to open the way to the Spellweaver's lair.

Korialstrasz, Prime Consort of Alexstrasza, now made a crucial request to the Alliance and Horde heroes who would take on the responsibility of confronting Malygos: that the Blue Aspect be slain, and the powerful

[Heart of Magic], Malygos's most prized possession, be recovered as proof of the deed. With everything now in place, the assault on the Eye of Eternity began. Having confronted Malygos, a vicious battle now ensued between the dragon and his mortal adversaries, who were eventually joined by drakes of the Red dragonflight. Ultimately, Malygos was defeated, in his last breath questioning the reasoning of Alexstrasza's actions.[10] Shortly after Malygos's death, Alexstrasza arrived and declared that the Nexus War had officially concluded.

"I did what I had to, brother. You gave me no alternative.
And so ends the Nexus War.
This resolution pains me deeply, but the destruction - the monumental loss of life - had to end. Regardless of Malygos's recent transgressions, I will mourn his loss. He was once a guardian, a protector. This day, one of the world's mightiest, has fallen.
The Red Dragonflight will take on the burden of mending the devastation brought on Azeroth. Return home to your people and rest. Tomorrow will bring you new challenges, and you must be ready to face them. Life, goes on."
—Alexstrasza, the Life-Binder

Aftermath of the Nexus War 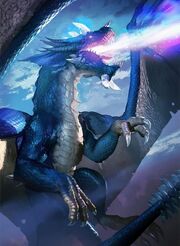 Kalecgos, the new Aspect of Magic and Malygos's successor

In the wake of Malygos's death in the Eye of Eternity, and the subsequent result of the war, the Blue dragonflight found its future uncertain. Others, such as Alexstrasza and Korialstrasz, express deep regret and discomfort at Malygos's demise, citing that he was ultimately one of the world's most powerful guardians. Korialstrasz himself remarked that "Magic is now without its guardian" and that "A storm is brewing on the horizon and now we are without one of our most powerful defenders".

After the war's conclusion, the Blue dragonflight apparently joined the Wyrmrest Accord, with Kalecgos acting as its ambassador in Wyrmrest Temple.

The position of Aspect of Magic remained a major power vacuum for some time to come. Eventually, it caused a great divide among the Blue dragonflight, with Malygos's son, Arygos, and Kalecgos contending for the position. Ultimately, Arygos was revealed as a servant of Deathwing, and the position is filled by Kalecgos.[11] This particular effect of the Nexus War almost caused disaster during the war against Deathwing during the Cataclysm.

Malygos's deal with the Ethereum would eventually lead to the organization attempting to plunder powerful treasures from within the Nexus during the third coming of the Burning Legion. Seeking to become void,[12] the ethereals began using the surge needles from the Nexus War in Coldarra to bore into the Twisting Nether and call on void energies.[13] After Nexus-Prince Bilaal is defeated by an adventurer and Azuregos, Azuregos remains in the Nexus so that its power will not fall into the wrong hands again.[14]

One member of the Kirin Tor, Normantis, was so impressed by the war that he was ousted form the organization and started hunting blue dragons even when those were allied with other mortals in Azsuna.