This article is about the playable race. For the nightborne lore, see Nightborne.

The nightborne (also spelled the Nightborne)[1] or shal'dorei in their native tongue[2][3] are one of the playable Horde allied races in World of Warcraft, introduced at the end of Legion. An offshoot of night elves that chose to seal themselves away from the world during the Burning Legion's first attack on Azeroth, the shal'dorei found themselves forced to ally with the demons upon their third invasion. Once liberated, the nightborne felt a kinship with the blood elves, and promptly joined the Horde.

Led by First Arcanist Thalyssra, nightborne begin in their capital city of Suramar before reporting to the Horde's embassy (much like all other allied races). Shal'dorei ride manasabers as their racial mount. Due to their isolation, the nightborne's language of Shalassian is unique to them. However, they have also learned Orcish from their new allies. 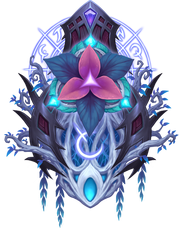 Isolated behind a protective barrier for 10,000 years, the elves of Suramar grew increasingly dependent upon the arcane magic of the Nightwell. To protect this font of power, the leaders of the Nightborne struck a bargain with the Burning Legion that plunged their kingdom into civil war. After fighting for freedom from their demonic masters, the Nightborne seek allies in the Horde to help them reclaim their place in the world.[4]

The nightborne of Suramar spent millennia isolated behind an arcane barrier, slowly transformed by the magic of the Nightwell. These proud, noble elves now seek to reclaim their place in Azeroth.

Thalyssra: For ten-thousand years, Suramar was the only world we knew. As the ages passed, Azeroth changed around us... and fell into the Legion's grasp. To secure our people's future, you must help reclaim our place in Azeroth. Venture forth alongside new allies and show the world that the legacy of the nightborne is one of nobility... and strength.

After the death of Grand Magistrix Elisande and the end of the Third invasion of the Burning Legion, the shal'dorei wished to rejoin the world. Thalyssra believed that it was unlikely they would share any common ground with the Horde, and that it would only be natural to join (or re-join, as it were) with the night elves, which Thalyssra herself was born as. After an exchange between Thalyssra and a sceptically cautious Tyrande Whisperwind, Thalyssra became disillusioned with the night elves' apparent arrogance and mistrust, while Lady Liadrin of the blood elves expressed a similar relationship with the night elves. Thalyssra also felt that the Alliance as an organization was too walled off and too cloistered, an undesirable trait after having been literally walled off for 10,000 years. After an offer of mutual friendship from Regent Lord Lor'themar Theron of Silvermoon, the shal'dorei leader decided that it would be best to ally with the Horde, who share ideals similar to those of the nightborne.[5]

The nightborne look similar to night elves, but their overall appearance is darker. Their skin does not have the brighter skin tones of purple and pink that night elves do, instead having more pale skin with dark blue-purpleish tones. A shal'dorei's hair is also far less colorful than the kal'dorei's, having only white, gray, black, or very pale-blue hair colors. Glowing tattoos seem common among nightborne, though whether these are cosmetic or a result of the Nightwell's energy is unknown. Their eyes glow light-blue.

In order to unlock the ability to play as nightborne, players need to have completed the achievement

Once these requirements are met, players must then complete the following recruitment questline: