For the location in the Nighthold instance, see Nightwell (subzone). 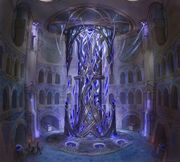 “We must put the Nightwell behind us. We must take responsibility for our failings, and repay our debt to the people of Azeroth....”

— First Arcanist Thalyssra, the new ruler of Suramar, allowing the Nightwell to perish

The Nightwell is a font of incredible power[1] created by the Highborne. The convergence of ley lines is what feeds its great power.[2][3] The fount was created and is sustained through the Eye of Aman'thul, one of the Pillars of Creation. Similar to the Sunwell, it permeates and empowers the elves who dwell in its vicinity. Arcwine is the method by which the Nightborne imbibe the Nightwell's energies, and the palace rations it to control the populace.[4] Being unable to feed off the Nightwell's energies causes heavy withdrawal symptoms. Banishment from Suramar is thus the harshest punishment in nightborne society, as exiles are cut off from the Nightwell's power and faced with degeneration, first into nightfallen, and in time into a withered state, a point of no return.[5] According to Arcanist Valtrois, the Nightwell's power rivaled even that of the Well of Eternity.[6]

After the defeat of Gul'dan atop the Nighthold, the Eye of Aman'thul was secured by the Kirin Tor. Without it, the well became unstable. Valtrois suggested attempting to stabilize it, even though the nightborne no longer needed it to sustain themselves, so that they could use its power, but First Arcanist Thalyssra believed it was best for the nightborne people to leave it behind them and let it die, a decision met with approval by both Tyrande Whisperwind and Lady Liadrin, who believed that Nightwell's power and allure would fade, with time.[7]

When the city faced starvation, this source of power would become more than a font for magical spells and works, it would become the principal source of nourishment in place of the exhausted food supplies.[citation needed]  Crimes in the city were punished by exile, and thus those exiled would suffer the horrible fate. The effects manifest as immense pain and hungering need to feed off Arcane energy. Exile would deny any access to Arcwine resulting in starvation, deterioration, and, after a period of time, to the mindless Nightfallen second stage of Withered.

The Nightwell is the Nightborne elves' great source of power, and through it they have been able to meet the majority of their essential needs and maintain a refuge, shielded and hidden from the rest of the world they believed was overrun by demons. The energies of the Nightwell would alter their night elven forms further, becoming more slender and darker toned than previous, and causing the well would to be a necessary source of nourishment.

The fruit of the Arcan'dor frees the Nightborne of this addiction, even allowing Nightfallen to return to their previous states. After this discovery, Thalyssra begins to hand out the fruit to those she can, freeing her people of their terrible curse. Ultimately, with the Arcan'dor at their disposal, Thalyssra becomes the new leader of the Nightborne after Elisande's defeat in the Nighthold. She uses it to remove the addiction, and allows the Nightwell to burn out, as it had began to dwindle without the Eye of Aman'thul, which had been brought to Dalaran.