Nomi is a pandaren cook. He is first found as a boy in Pandaria. Some years later, now as a grown pandaren, Nomi becomes a cook in Dalaran. 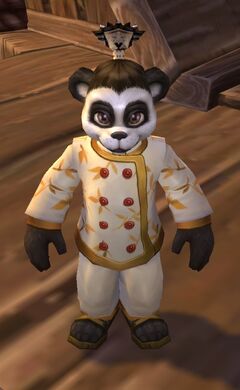 Nomi as a child.

[Cooking School Bell]. He offers a series of daily quests to help improve his cooking, beginning with Lesson 1 and eventually progressing to Lesson 5. Once Nomi has completed his learning, he will give a one-time quest to thank his teacher. From thereon, the adventurer will have access to the daily quest which rewards an

Nomi and Andi know each other. Afraid of Farmer Fung, Nomi is of the opinion that he eats cubs.[3] 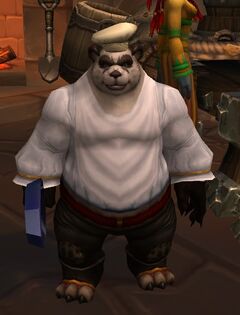 Nomi as an adult.

Once Nomi got old enough, he tried adventuring for a bit, but found cooking to be his passion.[1] Now a teenager, he caught up with his old master in the Broken Isles with an offer to work together once again. Soon after, Nomi got work at a kitchen in Dalaran.

He's also not very good at hunting or fishing.[4]

Nomi serves as the host of the Cooking Impossible PvP Brawl.

Along with Boss Mida and Micah Broadhoof, Nomi was sent to the Twilight Vineyards in Suramar City to assist in producing arcwine for the Horde. Vintner Iltheux put him in charge of gathering ingredients, a task he was ill-suited for as he simply fell asleep in the orchard.[5] When Meerah and the Horde adventurer arrived at the vineyards to help with production in the hopes of allowing the vulpera to join the Horde, they reassigned Nomi to the more suitable role of creating the recipe for the wine.[6] In order to make the arcwine appeal to the diverse palates of the Horde, Nomi made some slight changes to Iltheux's recipe and sent the adventurer to gather firebloom and moth fibers for the task.[7] When the finished wine was brought to Iltheux, the nightborne praised it and stated he could not have done better himself.[8]

Greetings, Master <name>. What are we cooking today?

What recipes do you sell?

Nomi appears as a legendary card in the Rise of Shadows expansion for Hearthstone. In reference to his habit of burning food and the memetic status he consequently gained with the playerbase during Legion (see below), Hearthstone's Nomi has the ability to summon an army of powerful Greasefire Elementals to aid the player. Nomi's flavor text reads: "His cooking is always very well done."