Nor'Danil Wellspring is a subzone found in Azsuna.[38, 34] 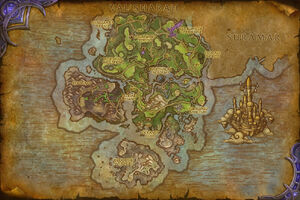 It is under the leadership of Lord Tash'irel, a now former subject of the Court of Farondis. Tash'irel and the rest of the spirits here under his leadership were driven insane from arcane magics they could not control, and thus plots vengeance against Prince Farondis and the Court.[1] It's possible this was caused when Tash'irel tried to lift their ghostly curse through sheer force of magic, referencing tomes stolen from Prince Farondis' library,[2] but this is not explicitly stated.

The lovers Enchantress Ilanya and Priestess Driana spent many blissful hours together here in life, before the devastation of Azsuna by Queen Azshara.[3]