For other uses, see Northgate.

The Northgate Rebellion[1] (also spelled the Northgate rebellion)[2] was a civil war which occurred in the Kingdom of Gilneas between forces loyal to the Gilnean monarchy, and those who supported disillusioned nobleman Darius Crowley, around the time of the Third War. It was named for the region in the north of Gilneas around the Greymane Wall.

The conflict was primarily a result of King Genn Greymane's alleged incompetence in the face of such external threats as the Undead Scourge. The rebellion occurred sometime between the closing of the Greymane Wall and the outbreak of the worgen curse. The civil war raged on for some time between the "Royals" (those loyal to the king) and the "Rebels" (those loyal to Lord Crowley) and led to a massive loss of life among the Gilnean populace.

In addition to also damaging much of Gilneas City and beyond, the Northgate Rebellion had the effect of sowing disunity in the kingdom. These divisions would eventually resurface and become relevant again with the second outbreak of the worgen curse and the Forsaken invasion of Gilneas, several years later.[3]

Prior to the Rebellion

Towards the end of the Second War, as the Orcish Horde threatened to overwhelm Lordaeron, Genn Greymane, King of Gilneas, deployed forces against the orcs as part of his commitment to the Alliance of Lordaeron. Greymane, however, was an unapologetic critic of the Alliance's existence and began highly reluctant to be involved in the organization.[4]

Shortly after the conclusion of the Second War and the defeat of the Horde, Greymane chose to erect a massive fortification—the Greymane Wall—ostensibly to protect the kingdom from future threats but in reality to seal Gilneas off from the rest of the world. Greymane had come to the conclusion that the Alliance of human kingdoms were simply not worth the many Gilnean lives it had cost, and so decided on an isolationist response.[4] To complicate matters, the decision to close Gilneas's borders and construct the great wall would cut through the lands of a newer, but still well-respected nobleman by the name of Lord Darius Crowley. Should the wall be finished, it would separate the towns of Pyrewood Village and Ambermill from the rest of Gilneas. This, coupled with the fact that Crowley was a known supporter of the Alliance led to a build-up in tensions between the two sides.[4]

The Greymane Wall, a source of much controversy among Gilneans

Initially, these tensions appeared to diminish. As King Greymane's wall finished construction, contact between the two areas (the villages outside the wall and the rest of the kingdom within it) all but disappeared. At this time, unaware of the death cults forming in Lordaeron, Gilneas finally cut all ties with the rest of Lordaeron and its Alliance of nations,[5] ensuring that it was now fully isolated.

Soon, however, with the onset of the Third War, the Plague of Undeath began to ravage the human lands north of Gilneas. In this midst of this region-wide crisis, tensions once more began to flare within the kingdom. As the epidemic in the north developed to become a fully-fledged undead invasion, the Kingdom of Lordaeron requested aid from the reclusive Gilneans,[citation needed]  only to be ignored. Before long, Gilneas found hordes of the undead encroaching on their lands. Desperate to find a solution, King Greymane enlisted the aid of the famous Archmage Arugal, who used his power to summon the lupine worgen to combat the Undead Scourge. While the undead were repelled, it came at a great cost; the feral worgen creatures soon turned on the humans and spread their curse throughout the human population of Silverpine Forest.[6]

The refusal to send aid to the beleaguered Alliance, as well as the fact that Pyrewood and Ambermill had been caught in the crossfire of the undead and worgen, caused tensions in Gilneas to once more reach a boiling point.

Unable to remain idle as his king went about what Crowley considered to be "tyranny", the nobleman sent a platoon of his own soldiers, in the form of the Gilneas Brigade, to aid the Alliance, as well as Lady Jaina Proudmoore's expedition to Kalimdor. Following this, the king angrily confronted Crowley and accused him of committing treason against Gilneas.[4]

Crowley, unrepentant for his actions, stated that there existed no reason or sense in the king's actions, and proceeded to declare a civil war against him. 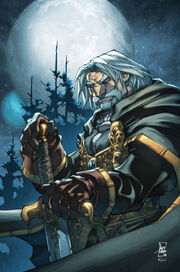 The Northgate Rebellion, so-called for the region in the north of Gilneas around the Greymane Wall, immediately began to gain support among disgruntled Gilneans and spread across the kingdom. Soon, fighting erupted across Gilneas, with the Northgate rebels, led by Crowley, battling the Gilnean loyalists, led by Greymane.

As part of his bid to secure the capital, Crowley succeeded in getting cannons smuggled and hidden within Gilneas City, under the loyalists' noses. The final, deciding moment of the conflict occurred when Crowley's army marched upon the capital city, setting it ablaze with artillery fire. Much street fighting likely followed, but the rebels were ultimately unable to overcome Greymane resistance. Having broken upon the city's defenses, the Northgate Rebellion was defeated, with the majority of its leaders, including Crowley, captured and imprisoned for high treason.[7]

Following the coup's failure and Crowley's imprisonment, the remaining rebels went into hiding. Many rebel weapon stashes throughout the city of Gilneas remained largely undiscovered. When eventually uncovered, the weapon stashes were said to have been powerful enough to take out half of the Military District.[8] The failure to take Gilneas City and Crowley's imprisonment effectively ended the Northgate Rebellion, as Gilneas returned once more to the unchallenged rule of King Greymane. 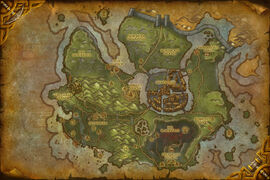 A map of peninsular Gilneas

Immediately following the defeat of the rebellion, a period of relative peace ensued for Gilneas. Some time after, however, the worgen infiltrated the kingdom and began terrorizing the forests of Gilneas. Fearful of causing panic following the end of the brutal civil war, and aware of the fragile state Gilneas had now found itself in, Greymane and several other nobles began discreetly hunting down and killing the wolf men.

The worgen numbers only continued to grow, however, and soon they began attacking Gilneas City itself. Countless worgen swarmed the city's districts and began to overwhelm its inhabitants. Unable to withstand the invasion alone, Darius Crowley and his Northgate Rebels were released from imprisonment on Greymane's orders and promptly aided in holding back the worgen masses.

The Gilnean people would go on to confront numerous other challenges, such as the worgen curse, a Forsaken invasion, and exile from their kingdom but the damage wrought by the Northgate Rebellion was largely healed by the pardoning of those involved and the unity in facing a common threat.