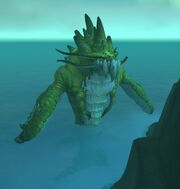 Oacha'noa in World of Warcraft.

Oacha'noa is a kraken-like sea-goddess worshipped by the tuskarr that can be summoned using the Pearl of the Depths at the Briny Pinnacle in the Dragonblight. She is involved in the quest

[72] Conversing With the Depths.

When first called forth by adventurers, Oacha'noa asks them if they are working with "the trolls of this land", likely indicating the Drakkari ice trolls, and wonders if they are there to kill her and take her power, likely referring to the fact that the Drakkari betrayed and killed their loa gods to use their powers against the Scourge. This could mean that Oacha'noa has been regarded as a loa, or that she may be a Wild God and as such could have had contact with the Wild Gods worshipped by the Drakkari, thus knowing their fate.