Oakin is initially seen at Riverbend when Dargrul uses the

[Hammer of Khaz'goroth] to destroy the village and is among the tauren caught in stone fists who have to be rescued by the player.

He later journeys to Cliff's Edge in Bloodtotem territory, vouching for the player so that they will not be killed on sight by the the Bloodtotem warriors. Oakin directs the player to killing the harpies who dwell in the Witchwood in order to prove their worth to Torok, the Bloodtotem chieftain, and accompanies the adventurer to the Cave of the Blood Trial, where they are to be tested in a traditional Bloodtotem rite of passage. However, when the player journeys deeper into the cave to complete the Rite of Blood, Oakin is abruptly killed by Marakhan, who emerges from a demonic portal just as the Bloodtotem reveal their allegiance to the Burning Legion and transform into the Feltotem.

He has to be rescued during 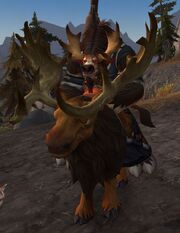 Oakin mounted on his moose at Riverbend.

Riverbend
I have only just returned from Bloodtotem lands, but I have heard of the aid you lent our people.

It shames me to see the day when outsiders like yourself are mor willing to help us than our fellow tribes.

Cliff's Edge
<Name>, we meet in dangerous territory. Thank you once again for your help at Riverbend. Be on your guard here among the Bloodtotem; they are not often kind to outsiders.