The Ogre Rumour was a collection of ideas and discussions which suggested that the new Alliance race to be introduced with The Burning Crusade may be the race of Ogres. These rumours were quashed upon Blizzard's announcement that the new race would be the Draenei.

Ogres, orcs and Draenei are the three original races from outland. "The Draenei are one of the three primary races native to Draenor (the others being the Orcs and the Ogres)." (source: http://en.wikipedia.org/wiki/Draenei#Draenei )The Horde appear to have minimal association with the Ogres in modern times- Horde friendly Ogre settlements are rare. Ogres are largely scattered throughout the World, splintered into many, many tribes, not unlike the trolls.

One of the rumours held belief that if an Ogre race was to be implemented, their capital would be in Kalimdor, perhaps residing within one of the largely mountainous areas in Stonetalon Mountains. This rumour was most likely fuelled by the apparently ill-balanced placement of the current Capital cities in regard to Kalimdor and The Easter Kingdoms.

In the build up to TBC, Blizzard announced the new Horde race of Blood Elves before the Alliance counterpart. The Blood Elf's apparent attractive, non-brutish appearance possibly caused certain watchful members of the fan base to consider that if the Horde (typically considered 'ugly') were to get an 'attractive' race, that the Alliance may get an 'ugly' race to balance.

For the sake of faction balance within realms, it was considered that if the Horde were going to get a slender, attractive model for their new race, that the Alliance would get a rugged, ugly model for theirs. This would aid to solve any balance issues caused by players rolling new characters after the release of TBC to try out the new races.

Within the discussions, people argued that ogres would be too tall to be a playable race; mentioning that either doors would have to be resized, or the ogres themselves would have to be smaller than the NPC or Mob model. However upon release of TBC, smaller, Tauren sized ogres have appeared throughout the World and Outland.

Due to there being a number of quests wherein the player assumes to body of an Ogre, ogres have /eat /kneel /sit /laugh /point /wave /fish and mounting animations. This again fuelled the Ogre rumour, with supporters stipulating that the existence of these animations meant Blizzard would not have to create new ones if the Ogres were chosen as a new Race.

Once slaves of the Old Horde it could be assumed that modern world, 'Free Ogres', under the leadership of Rexxar, would like to exact revenge upon their once oppressors. The effective way of acting upon their detest for The Horde would be to ally with The Alliance. This theory helped to support the Ogre Rumour. 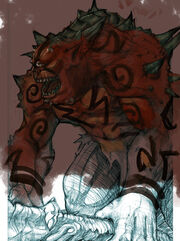 The Laughing Skull Clan once allied with the Alliance in exchange for dominance of the Blade's Edge Mountains. With the Bestiary on the Burning Crusade website, two new monsters have been revealed: the Gronn and the Rock Flayers. The Gronn are malevolent ogre demigods, that have possibly been causing the big guys some trouble. The Rock Flayers, like the Laughing Skull Clan, are also from the Blade's Edge Mountains, and it's not hard to believe they are causing the ogres trouble as well. These two threats may encourage the ogres, specifically those of the Laughing Skull Clan, to seek out their old, temporary allies in the Alliance.

Before TBC, The Horde lacked a race that had naturally high Intellect. Similarly, the Alliance lacked a race with heightened Strength. Upon the announcement of the Blood Elves, and their magical past and inclination, it was considered that they would fill the intellect void on the Horde side and so convincing some that the Alliance's race would have heightened Strength. Given their size, Ogres were an obvious answer.