Killed by re-origination on other worlds

Algalon came to Azeroth to determine whether Old God infestation had gotten so bad that re-origination was necessary to get rid of them. When he was defeated, he said: "I have seen worlds bathed in the Makers' flames, their denizens fading without so much as a whimper. Entire planetary systems born and razed in the time that it takes your mortal hearts to beat once." Given Algalon's function, it's probable that those other planets were re-originated to exterminate Old God infestations.

Dave Kosak said during an interview that the titans had killed "a lot" of Old Gods.[1] However, on Azeroth, there had only been one confirmed death of an Old God by titans (Y'Shaarj). These other Old Gods the titans killed were likely due to the re-originations Algalon spoke of.

Presence of the Old God

Presence of the Old God is a maw located in Icecrown which resembles C'thun. They also both share the same model. The maw is located at the bottom of some water in the middle of the Weeping Quarry, and moves and seems to be alive. This is probably an extension of Yogg-Saron, but may be a separate creature.

Anzu appears to be a Wild God. It is not clear if he is connected to the Old Gods but he is apparently at work in the Emerald Dream.[2]

The former member of the Twilight Hammer, Theldurin the Lost, speaks of "a doom approaching" and he is afraid of it. It's known that "they" are imprisoned under surface and if they are freed and rise to the surface, it will be death for everyone. He says he "cannot utter their names or they may hear" him, though he mentioned one name - "Ryun'eh". Theldurin wants to get the tablet of Ryun'eh that is hidden in Uldaman, in an ancient chest crafted before the works of any dwarf.[3][4]

Like C'Thun and Yogg-Saron, this name appears to be based on the works of H. P. Lovecraft (a city R'lyeh).

Several forgotten ones, like Soggoth[5] and Forgotten One, are actually n'raqi. 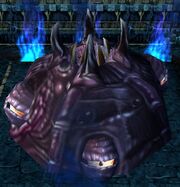 The forgotten ones[6] of Northrend are massive and powerful tentacle-bearing aberrations living in the deeps. Forgotten ones seethe below, eager to return to the world above.[7] One of these ancient, terrible beasts lay imprisoned beneath Azjol-Nerub, until Illidan's attempt to melt away the polar ice-caps surrounding Icecrown and crush Ner'zhul, accidentally broke the beast's prison. Before it could act, however, Arthas Menethil, Anub'arak, and a small army of undead Nerubians crashed into its prison, and even weakened as he was, Arthas managed to defeat it.[6] Since the Old Gods of Azeroth have been identified, the forgotten one is likely a minion of the Old Gods or a portion of Yogg-Saron.

In Uldir, the plan of the titans was to try and kill the Old Gods without killing their host, Azeroth itself. It is confirmed that mortals can't kill an Old God completely unless they find a way to do that.

Aman'Thul killed Y'Shaarj by ripping it out of the surface of Azeroth. The rest were defeated and imprisoned by the titan-forged. It might be that mortals killing Old Gods, such as C'Thun and Yogg-Saron, can be achieved because these Old Gods were in a severely weakened state from their imprisonment, and were just making their way back onto the world stage.

Though free and fully awake,[8] it is possible that C'Thun was only able to regenerate to a fragment of its former strength. This would explain how modern adventurers from the Horde and Alliance were able to kill it in the Temple of Ahn'Qiraj.

Yogg-Saron had not yet broken through the last of its restraints,[9] and the adventurers had aid from several titan keepers.

A number of Faceless proclaim that the Old Gods "are outside the cycle" of life and death.[10] Though the titans have killed several Old Gods across the Great Dark[1][11] and the adventurers are stated to have killed C'Thun[12] and Yogg-Saron,[13] the theme that death is not the end is frequently raised in Warcraft. All things have souls[14] that carry on to some form of afterlife. These spirits can be brought back to life or undeath. C'Thun drove Cho'gall to attempt to resurrect it.

Some dead characters have been able to whisper through pieces of their bodies, such as Gul'dan through his skull, C'Thun through its corpse, and Y'Shaarj through its heart.

As the Old Gods are creations of the void lords, it's possible that, much like demons, they can be remade again and again so long as they don't perish within the Void.

N'Zoth is currently active on Azeroth and could likely be implemented in a future expansion or content patch. Check the Rumored Expansions for some of the possible settings for future expansions. N'Zoth's prison should be located south of the Broken Isles.

In response to the retcon regarding the number of Old Gods present on Azeroth, a suggestion was made that there were, in fact, five Old Gods who landed on Azeroth, but one of them was completely and utterly obliterated to the point that none remember its existence. This possibility is echoed in the possible origins of Xal'atath, and further suggests that the other four Old Gods were responsible for its annihilation. Whether this will ever become anything more than in-universe rumor is unknown.