For the alcohol, see 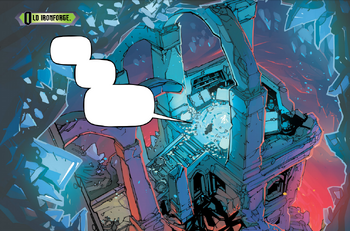 As seen in Magni: Fault Lines

Old Ironforge, also known as the Assembly of Thanes,[1][2] is a chamber deep below the High Seat of the dwarven capital of Ironforge. In an effort to aid the troubled elementals that foreshadowed the Cataclysm and the return of Deathwing, King Magni Bronzebeard opened a part of the old city and attempted a titan ritual to commune with the earth but was turned into diamond. He stood rooted on what has become known as Magni's Dais.[3] A long and winding path leads over the lava to the two doors of Aegrim's Study.

While Old Ironforge has always been present in-game, its entrance was originally closed off until Cataclysm.

After Magni received earthen stone tablets from Brann, he ordered the sealed gates of Old Ironforge to be opened for a ritual. The key took two dwarves to lift, and it took a ladder for them to reach the lock. After venturing through the door, a linear path led Anduin Wrynn, Muninn Magellas, Advisor Belgrum, High Priest Rohan and Reyna Stonebranch to a large cavern. A surprisingly new-looking carpeted path led upwards to a broad platform capable of holding a large group, and an unadorned stone path led downwards. The ceiling is made of diamond. With an incantation scroll and a potion, Magni performed the ritual to become one with the earth. While listening to the incantation, Anduin called this place the "heart of the earth". The ritual seemingly worked, but turned him into a solid diamond statue.[4]

In the opened Old Ironforge could be found a petrified Magni, Advisor Belgrum, Honor Guard Dunstad, some Ironforge guards and three large tomes being present. Orphaned children wanted to see the statue during the Children's Week. Belgrum and Dunstad would give explanations to Alliance adventurers and the children about what had happened to Magni.

Before the Burning Legion's third invasion started, Moira paid a visit to her crystallized father in Old Ironforge. All these years, Magni had watched over his daughter, but at this moment, Magni finally awakened. News spread through the city that the king under the mountain had returned, and Muradin and Falstad arrived to witness it. It was Azeroth herself who had released Magni, as she had foreseen the Legion's return. He asked for the dwarves to prepare themselves, and set out to warn the rest of the Alliance of the demons' imminent return.[5]

As a result, Dunstad moved to the throne room, but Belgrum remained to explain the absence of Magni to visitors.

Since Magni broke free from his crystalline chamber, glittering shards from his liberation now litter the floor and stairs.[3]

When King Anduin Wrynn visited Ironforge, Moira Thaurissan and her son Dagran took him to the chamber. Dagran found the scroll Belgrum read during the ritual and began reading it as well. As the two monarchs conversed, a guard found them and told them that Magni arrived to the city.[6]

The long and winding path now leads to the study of Aegrim Bronzebeard.[7] An adventurer was tasked with retrieving some of the crystal bits left behind by Magni when he awakened, to help reforge Aegrim's armor.

The Hall of Thanes is a massive, natural cavern complex located in Ironforge's lowest depths. The area is a true marvel of organic stone formation: no dwarf has touched this cavern with pick or chisel. Ironforge's kings are buried in the Hall of Thanes, and the old throne is here as well. Also within this cavernous area is the ancient, weathered Iron Forge — perhaps the greatest titan artifact ever unearthed. The dwarves do not use this holy anvil, but keep it near their honored dead and the seat of their power. Brann Bronzebeard believes that as dwarves uncover more truths about their ancestry, they will find greater uses for the Iron Forge. He believes the titans must have given it to them for a reason.[8]

Considering that the area is also known as the Assembly of Thanes, the mountain kings of old might have met here before the foundation of the kingdom of Ironforge. Alternatively, it might also be that old kings are buried here as was the case in the Warcraft RPG.