Oliver Harris is a worgen quest giver located in Raven Hill in Duskwood. He is working to save the mindless worgen running rampant in the area.

He is the master of Apprentice Fess. Tobias Mistmantle is another worgen in Duskwood that refers to him as "Master Harris".

During the Fourth War, Vassandra Stormclaw was working in Raven Hill, and his sedative was used to drug and bring Bloodeyes to her alive.[1]

I don't care how low the success rate here is. If we save even one worgen from the madness and savagery of the woods, our struggles will not be in vain.

The Lurking Worgen and Sven Yorgen are same person in the following dialog, the name change comes as he regains himself through the use of Oliver Harris' alchemy.

He may be related to Darla Harris, Chief Plaguebringer Harris, and General Harris. 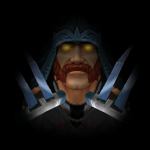