Wowpedia
Register
Don't have an account?
Sign In
Advertisement
in: Assault on the Dark Portal quests, Neutral quests, Quests at 10-40 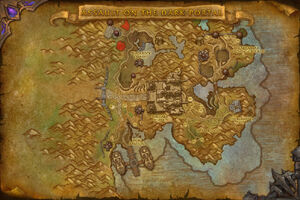 Disable the two fel spires of the Dark Portal.

"Guard Gul'dan and his Shadow Council with your lives! The portal cannot function without their fel magic. Fail me and watch all that you hold dear turn to ash.

The Iron Horde appear to be holding prisoners that are crucial to keeping the portal open. Search the nearby spires!

See the drifting energy from the tips of those spires? They clearly have some effect upon the portal.

With any hope the portal falls along with them.

The portal is weakened, but it remains open.

Head to the northwest and southwest corners of the platform, immediately north and south of where the main melee is.

Hansel Heavyhands says: Get on in there, champ!
Thaelin Darkanvil says: Don't worry. We've got your back!

Inside the north fel tower is Cho'gall, who says the following:

Cho'gall says: You... outsider. Destroy that relic, and set us free. (Crush the relic! Smash the relic!)

Interact with the Mark of the Shadowmoon.

At the south fel tower, Teron'gor is imprisoned!

Interact with the Mark of the Bleeding Hollow.

Place the three mana bombs near the Dark Portal.