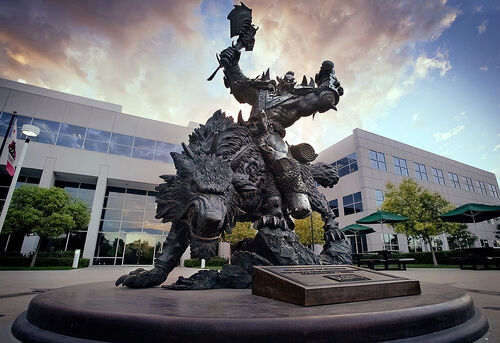 The Orc Statue is the iconic sculpture found at Blizzard's headquarters in Irvine, California. It was created in 2007.[1] When visitors pass through the gates of the office campus, they immediately gravitate toward the Orc statue. A dear hero in Blizzard's heart, it is a popular spot for meeting people ("Let's meet at the Orc statue!"), posts on social media, symbolic events (passionate founder speeches often take place in front of the Orc), holiday community projects,[2] and 1 trillion photos and selfies (actually only a billion).[3]

The quote above was the challenge Blizzard presented to New Zealand-based Weta Workshop. Blizzard worked closely with the artisans in China and New Zealand to help turn the small prototype into a bronze behemoth. A year since intense work, the 12 foot tall, 2 ton bronze orc warrior stood watch of the courtyard of Blizzard Entertainment's Irvine campus.

First Thing’s First - Modeling
A team in New Zealand scanned the original 12-inch tall statuette and created a virtual 3D model
Up Next - Details, Details, Details
The 3D model was then sent to a manufacturing center in China, where the artists sculpted, molded, cast, waxed, bronzed, welded, and buffed to turn the virtual presentation into a 12 foot tall statue.
Last, but Not Least - Delivery
The massive sculpture was transported from China to Irvine using a custom-built steel dolly and shipping container, and set into place with a crane.