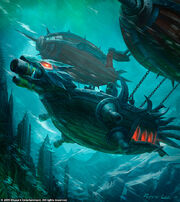 Orgrim's Hammer as it appears in the TCG.

Orgrim's Hammer in a gunnery duel with the Skybreaker.

Orgrim's Hammer is the name of the Horde gunship flying over northeastern Icecrown. It replaces the usual ground bases in other zones due to the large Scourge presence on the ground. It sometimes engages in battle against the Skybreaker, the Alliance gunship. So far, neither have been severely damaged, but both are in constant danger of attack from the other and from the Scourge forces on the ground below them. It is named in honor of Orgrim Doomhammer.

The latest in goblin zeppelin engineering, the ship is held aloft by two large balloons on either side of it. In order for engineers to service both balloons, and to prevent them from drifting apart, a large metal catwalk links the two together. While the balloons would appear rather delicate and vulnerable at first, a closer look reveals that solid steel hides beneath the crude fabric. Unlike most goblin Zeppelins, which are prone to malfunction, this gunship bolsters a better use of Goblin mechanics, keeping it from malfunctioning, such as the normal Zeppelins are prone to do.

Just as the Skybreaker has a large bomb on board, Orgrim's Hammer has an enormous main cannon positioned at the front of the craft, beginning nearly halfway to the back of the ship and ending by poking out of the mouth of a large, stone wolf head, positioned at the ship's front. However, just like the Alliance's bomb, the cannon is not used in-game. There is an interesting glitch involving the cannon — if one flies into the opening and right to the back, they will find themselves stuck, presumably behind a one-way invisible wall — a spot from which the only way to escape is by hearthing.

Orgrim's Hammer is also a common sight in the air near the Argent Tournament Grounds in northern Icecrown, as its circuit around the frozen wastes takes it through and around the mountains to the southwest of the Crusaders' Coliseum.

In the Halls of Reflection, the final wing of the Frozen Halls 5-mans, Orgrim's Hammer comes to the rescue of Horde players escaping the Lich King when they become trapped on a platform outside the Hidden Passage.

The Orgrim's Hammer, under the command of Varok Saurfang, later becomes involved in a Gunship Battle with the Skybreaker in Icecrown Citadel. Although it is the same gunship, it has been remodeled slightly for use in the raid; all below deck entrances have been covered up.