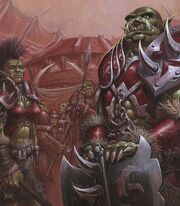 Orgrimmar Grunts in the TCG. 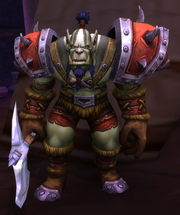 Orgrimmar Grunts are max level orc guards located throughout the capital city of Orgrimmar as well as in the nearest parts of Durotar and Azshara. They can provide directions to various locations in the city.

They defended the city during the Elemental Unrest, cheering for their new Warchief.

As tensions between the Darkspear Rebellion and Garrosh reached a breaking point, many grunts divided between the True Horde and the Rebellion.

During the Siege of Orgrimmar, the Orgrimmar Grunts were called upon by Warchief Garrosh Hellscream to defend Durotar from the encroaching rebellion to the south and other rebels and the Alliance armada incoming from Bladefist Bay alongside the Kor'kron and Garrosh's other forces. During the initial siege of the city itself, the majority of the grunts remained on the Kor'kron side, while some defected to Vol'jin's rebels in the front of the city. After the death of General Nazgrim, the remaining grunts swore allegiance to Vol'jin and helped the rebels and Alliance invade the Underhold to find and put an end to Garrosh.

Nowadays they can be seen patrolling the city alongside Darkspear Headhunters and Thunder Bluff Protectors.

After the death of Vol'jin, many grunts in the city commented on the recent events.

Shortly before the Burning of Teldrassil, they guarded the recruits gathered at the Dranosh'ar Blockade.

During the last stage of the War Campaign, a large number of them participated in the events and were patrolling the city. Following the deposition of Warchief Windrunner, they were seen escorting the chained Banshee Loyalists.

They appear in the Vision of Orgrimmar.

What are you looking for?

Look for the orc Varzok atop the city's central mesa, just east of the Flight Master.

A trio of ethereal technomancers has set up shop in Orgrimmar, along the eastern Drag.

Look for the weird machinery and purple lights... you can't miss it.

They offer just the sort of services you're looking for.

It's in the Valley of Strength, east of the entrance to Grommash Hold.

It's across the bridge from the gate to The Drag. Listen for the sound of shouting goblins.

The Valley of Strength's bank is south of the entrance to Grommash Hold, northwest of the main gate.

The Valley of Honor's bank is just before the gate to The Drag.

The barber? She's moved shop, out of the Cleft of Shadow and into the cliffs above the Valley of Strength, where the fruit vendor used to be.

You will find the battlemasters inside the Hall of the Brave in the Valley of Honor.

Which trainer do you seek?

Go to the Hunter's Hall in the Valley of Honor, west of the Coliseum. Talk to Ormak Grimshot there.

The mages may be found in the Cleft of Shadow. There are two entrances: One between the valleys of Strength and Wisdom, and the other in The Drag.

Zayus and his priests are in the Spirit Lodge, which is in the Valley of Spirits. Look for it on the lake up above and to the west of the Valley of Strength.

You seek Grol'dar and the Darkfire Enclave? Find them in the underground cavern called the Cleft of Shadow. There are two tunnels leading down into that cave, one just south of the Valley of Wisdom and the other from The Drag.

Speak to Grezz Ragefist in the Hall of the Brave, which is in the Valley of Honor. Put in a good word for me!

Find the Wind Rider Master at the top of The Sky Tower in the Valley of Strength. Doras will make sure you find your way to the battle you seek.

The Horde Embassy is in the Valley of Strength on the west side.

That's the second building on the right in the Valley of Strength north of the main city entrance. Speak to Innkeeper Gryshka.

Look for The Wyvern's Tail, just outside the Hall of the Brave.

Look for it high up on the west side of the Valley of Strength.

Orgrimmar is the heart of the Horde, offering many forms of travel to the far reaches of Azeroth and beyond.

Where are you looking to travel?

The zeppelin to Thunder Bluff in central Kalimdor leaves from the western zeppelin tower top the central plateau in Orgrimmar. Zeppelin master Zelli Hotnozzle will have more information for you there.

Undercity or Silvermoon City in the Eastern Kingdoms

Stranglethorn Vale in the Eastern Kingdoms

Seek out Snurk Bucksquick on the western zeppelin tower atop the central plateau in Orgrimmar. She is the zeppelin master for Stranglethorn Vale and will let you know more info on when the zeppelin will depart for our outpost of Grom'gol in the southern Eastern Kingdoms.

There is a portal that leads to Hellfire Peninsula in Outland. It is located within the Cleft of Shadow, underneath Orgrimmar.

For Borean Tundra in Northrend you will want to take the zeppelin The Mighty Wind. Seek out Greeb Ramrocket on western zeppelin tower for when it departs for Warsong Hold.

Areas opened up in the Cataclysm

The Earthen Ring have set up portals to various regions of the world on the cliffs north of the zeppelin towers.

There are representatives from Hellscream's Reach there as well, offering transport to Tol Barad.

Our allies in Pandaria have allowed us to create a portal to Honeydew Village in the Jade Forest. It is located in the middle of the Valley of Honor.

Blasted Lands and the Portal to Draenor

Our mages have opened a portal just inside the Cleft of Shadows to assist players getting to the Blasted Lands and on to Draenor.

Dalaran above the Broken Isles

The Kirin Tor have setup a portal in the Cleft of Shadows to assist players in getting to Dalaran above the Broken Isles.

Look for Yelmak's Alchemy and Potions. Find it in the middle of The Drag, west of the huge tree.

There is a blood elf in the Valley of Strength's central fortress, part of a delegation from Silvermoon: Belloc. He is who you want.

Talk to Saru Steelfury at The Burning Anvil. Go to the Valley of Honor. It's at the end of the path to the right of Red Canyon Mining.

Godan's Runeworks is where you'll go. Look for it on the west end of The Drag, right next to the Valley of Wisdom.

That Lumak... always fighing instead of fighting. You'll find him out on his dock in the lake in the Valley of Honor. While you're there say hi to Shankys for me.

Go to Kodohide Leatherworkers in The Drag. Ask for Karolek.

Find Red Canyon Mining northeast of the lake in the Valley of Honor. Speak to Makaru there.

Thuwd will show you how to skin your kills. Look for him at Kodohide Leatherworkers in The Drag.

Magar's Cloth Goods is in The Drag. Find him south of the huge tree next to the Kodohide Leatherworks.

Guarding the bank and treasures of the Horde is far more satisfying than dispensing coins and trade goods from inside a cage of iron.

I would not exchange places with one of those quill-pushing goblins for a moment.

On approach during Vol'jin's funeral