For other orphanages, see Orphanage. 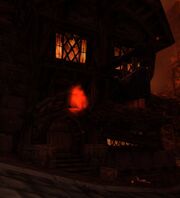 The exterior of the orphanage as seen in Stratholme.

The Orphanage of Stratholme is located in King's Square. It was under the responsibility of Orphan Matron Meliana. During the Culling of Stratholme, Matron Melina armed herself and holed up in the orphanage to protect the children while Prince Arthas walked the city streets like a madman.[1] They didn't know how much time they would stay in the orphanage, but they had plenty of food.[2] At some point during the Culling the children were evacuated.[3]