For the druid talent, see 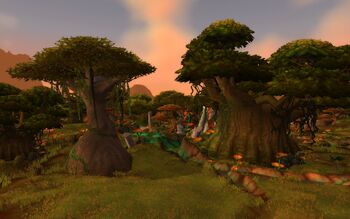 The Overgrowth is a lush jungle in the Southern Barrens that was regrown thanks to the efforts of the night elven druid Naralex. The forest also contains night elven ruins where Naralex felt a great tragedy occurred at. Raptors and plainstriders can be found here, amongst others.[1]

However, the jungle was invaded by the Emerald Nightmare through the Nightmare Scar at the center of the forest. The Nightmare's influence caused the wildlife to change and mutate, and the plant life to grow uncontrollably. This notably led to Bramblescar, home of the Razormane quilboar tribe, being swallowed by the Overgrowth. Fortunately, Naralex and his tauren disciple Muyoh managed to seal off the Nightmare corruption thanks to the aid of brave adventurers, and they believed the balance of nature would take hold here once again.

At some point after the Alliance attack on Camp Taurajo, the tauren refugees built Camp Una'fe at the edge of the jungle, but the forest had since grown beyond it.

During the Fourth War, the animals at the Overgrowth were acting strangely due to the appearance of the Azerite in the Wailing Caverns.[2][3]

A portion of the Overgrowth region is filled with broken ground and is a night elven archaeology dig site.