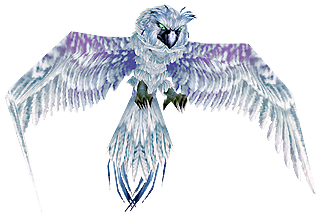 Owls are broad-faced, nocturnal birds known to hunt rodents and reptiles. They look different from most birds in that they have wide faces, short curved beaks, and large, front-facing eyes.

Owls are found throughout Teldrassil, Felwood, and Winterspring. In Alterac Valley, the Alliance has befriended the owls. Owls with dark feathers have been found native to Outland, living in Shadowmoon Valley, but nowhere else. However, the similar-looking windrocs and kaliri do appear in other areas.

They are a symbol of the human region of Tol Barad and are used by the Stormpike clan of dwarves. The owl is also a common emblem of the night elves,[1] and priestesses of the moon and huntresses have the ability to summon owl scouts and owl sentinels.

Owls are tamable by hunters as members of the bird of prey family. Some players avoid them because their large wings can interfere with targeting.