For lore about paladins, see Paladin.

Paladins are a holy order of warriors whose purpose is to defend and shepherd the war-torn populace of Lordaeron. The Archbishop Alonsus Faol perceived that the pious Clerics of Northshire, who suffered such terrible attrition in the First War, were ill-suited for the dangers of combat. Along with many of the surviving Clerics of Northshire, he sought those of only the greatest virtue among the knighthood of Lordaeron and tutored them in the ways of magic. Led by the crusading Uther Lightbringer, it now rests upon these Paladins - christened the Knights of the Silver Hand - to heal the wounds sustained in combat and to restore faith in the promise of freedom from Orcish tyranny.[1]

Upgrade Shields (Armor +2)
Increases the armor of Footmen, Knights, and Paladins by +2.

Upgrade Shields (Armor +2)
Further increases the armor of Footmen, Knights, and Paladins by +2.

Aiding our brethren in times of pain and illness remains the fundamental concern of any within the holy Order. By focusing his spiritual powers, the Paladin can heal those who have been wounded in battle. While only one being at a time may be healed in this fashion, it serves to replenish the strength and courage of all who strive for victory against the unfeeling Orcs.[2]

Calling upon the forces of light and purity, the Paladin is able to dispel the walking dead that plague the lands of Azeroth. Exorcism can be used to cause injury to entire groups of these undead terrors, or to utterly eradicate a lone creature. These creatures of Hades seem to gain strength in numbers, thus the greater number of undead that are exorcised within a group, the less actual damage each undead will take. This act is extremely taxing upon the Paladin, making it necessary for him to observe a period of rest before once again invoking this great power.[2] 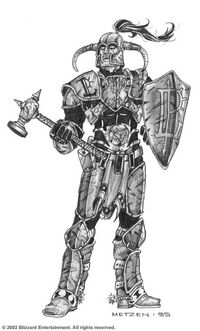