“I have encountered evil in many places. Even deep within my own soul, I have seen dark shadows of what could be. However, the evil within the hearts of the Pale defies explanation. It is dark, loathing, and miserable in a way I have never encountered.”

Pale orcs, also called the Pale, are deformed, sickly orcs afflicted with unnaturally pale skin and glowing eyes as a result of Void corruption. They were once found on the main universe's Draenor, where Cho'gall recruited them into the Horde to form the Old God-worshipping Twilight's Hammer clan. Many Pale orcs still plague the alternate Draenor.

The Pale are wretched creatures who hate the Light and despise all that is good and holy, hiding beneath the ground and plotting against the innocent and those who dwell on the surface.[2] Dangerous and disturbing, the pale orcs are little more than husks of barely living flesh bent by dark magics.[3] They are expert scavengers[4] and are known to eat their victims alive.[3] Many have a close kinship with spiders.[1][5][6] 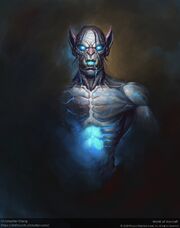 Concept art of a Pale.

A Pale and a captured earth fury.

When young orc shaman from around the world come of age, they make a pilgrimage to the Throne of Elements to seek the blessings of the elemental spirits. The entire journey is filled with risk, but the ceremony itself is the most dangerous time of an orc's life. They enter trances to attune their minds to the elements. Some orcs are found worthy; others are not. In the act of reaching beyond the veil of the physical world, some would-be shamans even find themselves communing with dark forces. These poor souls accidentally glimpse a realm beyond Draenor, the Void, and what they see drives them insane. The survivors are exiled from their clans and forced to live in the caverns below Nagrand in seclusion. White skulls are tattooed on their faces, marking them as "dead" to their people.[7][8]

Over the generations, the number of exiled shaman increased. When the Genedar and draenei crashed on Draenor, the small society of underground orcs took notice. They expanded their tunnels beneath Oshu'gun, the crashed ship's remains, to investigate the newcomers. In time, they tapped into the Void energies from the fallen naaru K'ure within Oshu'gun that bled from its body and seeped into the ground. Through the study of this power, the outcasts began communing with the void lords, bombarding them with visions of the apocalypse and revealing the secrets of using shadow magic. The influx of Void energies gradually turned the exiles' skin a sickly white.[9]

Two hundred years after the draenei crashed, the Old Horde was rising on Draenor. As they did so, the Pale thrived in catacombs beneath Nagrand. Their dark power rivaled even fel magic in potency, and rumors of the Pale and their otherworldly abilities eventually reached Gul'dan. Though he paid little heed to the stories, his master, the eredar lord Kil'jaeden, was intrigued. Because Kil'jaeden pressed Gul'dan to ensure victory over the draenei at any cost, that meant investigating the Pale to determine if their magic could strengthen the Horde. Gul'dan sent his apprentice Cho'gall to investigate the Pale, and if they proved as mighty as the rumors claimed, to bring them into the Horde.

Cho'gall stormed into the Underpale expecting a fight, but found none. The Pale did not resist his intrusion for they were eager to share their prophecy of doom: the Hour of Twilight, a time when the shadow would envelop the universe and snuff out all life in existence. Cho'gall had little interest in their prophecy but was very interested in their unfamiliar shadow magic. To win the Pale over, Cho'gall used their beliefs to his advantage and claimed that Horde was a weapon by which they could bring about the Hour of Twilight. The Pale reveled in the opportunity to serve as agents of the apocalypse. They committed themselves to the Horde and formed a new clan: the Twilight's Hammer clan.

As he too learned to master shadow magic, Cho'gall would see the truth in the Pale's prophecy. It would take him many years, but he would eventually devote himself to their quest.[10]

Eventually, the Horde traveled to another world called Azeroth and entered a war with the humans of Stormwind. As the war raged, the Twilight's Hammer became a problem for Warchief Blackhand. The Pale were prone to disobeying orders and too many wandered off, never to be seen again. Blackhand considered making an example of them and wiping the entire clan out, but Cho'gall intervened; so far, he had only been the Twilight's Hammer's de facto leader, and he offered to become their official chieftain to keep them in line. Blackhand let him try, and was pleasantly surprised when Cho'gall was able to make the Pale into obedient, effective soldiers almost overnight.

Cho'gall's success was in his understanding of the Pale and their beliefs. They worshiped the powers of the Void, and the moment they had arrived on Azeroth they felt the Void call out louder and clearer than they ever had before. The Twilight's Hammer had been hearing the whispers of the Old Gods, ancient evils imprisoned deep within the earth that served the void lords. Discovering them had overwhelmed the Pale, driving them into a state of pure ecstasy. It was seen by the clan as a sign of destiny, that they had found the place where they belonged: the place where they would bring about the Hour of Twilight. As for Cho'gall, while he had believed the Void was a force, he had cared little at first for his clan's mad ravings about dark gods. But now, he had proof they existed. He agreed to help the Pale and brought them under control with a simple notion: the Hour of Twilight was not far off, and the Horde's success was the best way to bring it to fruition. Until then, they had to keep up appearances to Blackhand and obey their true masters in secret. The Pale agreed, and the Old Gods seemed pleased with the Horde's lust for war and destruction, so it was no great sacrifice to proceed with the conquest of the world.

As the weeks passed and Cho'gall attuned himself to the Old Gods, he branded the Twilight's Hammer's prophecies onto the skin of the Pale orcs. He then cut off their flesh to form pages, making a book that codified the teachings of the Void: the Twilight Canticle. The book would become a source of power and motivation for the followers of the Old Gods for decades.[11]

In the alternate universe, the pale orcs draw on the power of K'ure[12] and Cho'gall says that they are the key to subjugating him.[13] Cho'gall, referred to as "the master", has taught the Pale how to use the Void and through it enslave elementals.[14] After siphoning K'ure's power, Cho'gall led the pale orcs to attack the ogre capital, Highmaul. 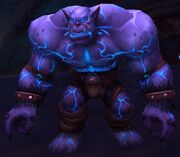 Maraad seemed not to recognize pale orcs, suggesting they were not particularly involved in the draenei genocide. The pale orcs are also nowhere to be seen on Azeroth in modern times, meaning they were likely all exterminated during the First and Second Wars.[15]