The Pandaren Revolution[1] was an armed uprising, initially consisting of pandaren monks, which sought to overthrow the oppressive and decadent mogu empire who held them in a state of slavery, around 12,000 years before the opening of the Dark Portal. Utilizing a new, unusual, but highly effective form of unarmed combat, the pandaren achieved stunning victories against seemingly superior mogu forces under Emperor Lao-Fe. These victories gave heart to the many other races in mogu servitude, and the rebellion quickly began to grow to encompass a wide range of different races, such as the jinyu and hozen, united by a common cause, and whose racial skills greatly contributed to the revolution's continued success. With its entire infrastructure based upon the work of slaves, any sense of order in the empire rapidly began to crumble as more slaves flocked to the uprising.

In response to this, as well as a number of major defeats, Lao-Fe retreated to the Vale of Eternal Blossoms, the seat of mogu power, with the majority of his forces. Now forced into a direct battle, the rebel forces launched an all-out assault on the vale, seeking to permanently defeat the mogu in one decisive blow. Although having sustained heavy casualties, including their leader, the revolutionaries succeeded in routing Lao-Fe's army and decisively shattering imperial mogu power, Lao-Fe himself also being killed.

The Pandaren Revolution marked the end of an era in Pandaria, and the commencement of a new one where the many races of the region enjoyed full autonomy and, for the most part, flourished as a result. In the wake of the war, the Pandaren Empire was founded. Based on the principles of justice, wisdom, and benevolence, this new empire worked to maintain peace between the region's disparate races who had achieved the impossible together.[2]

Peace for the pandaren's new nation was not to last, however. The mogu's greatest ally, the Zandalar tribe of trolls, spent the next 100 years after the revolution organizing themselves and then launched an invasion of Pandaria, beginning the Zandalari Troll Wars.

The cruelty of an empire

Following the death of the Thunder King, Lei Shen, in Uldum, the mogu empire entered a period of eclipse, where it lost much of the power and lands it once held. Despite this, it still remained powerful enough to retain many areas and continued to rule over a vast helot class of slaves from various races across the region, which were used to perform a wide variety of functions. Lei Shen's successors, in tandem with this, began to become exponentially more cruel in their treatment of the vast amount of slaves under mogu rule. The final mogu emperor, Lao-Fe, was proficient enough in this regard to earn the title of 'Slavebinder' early in his reign.

To maintain obedience among the empire's slaves, he was known to tear families apart, even for mild or benign transgressions. One such common punishment was for the children of slaves who were perceived to be disobedient to be sent to the Serpent's Spine wall to act as fodder in the ruthless Mantid Swarm. One such fate befell the son of a pandaren brewmaster, Kang, his wife also being slain attempting to stop the seizure. Dismayed and broken by these events, Kang wondered to him himself: how could the mogu intentionally cause such pain?

After much meditation, Kang came to a radical conclusion. The extreme cruelty towards their slaves, he concluded, was not a sign of the mogu's strength; it was a symptom of their weakness. The mogu had become dependant on their servants; without them, they were nothing. Kang resigned to dedicate his life to exposing the vulnerability of the mogu, however long it would take, and at whatever personal cost to himself.[2]

The way of the monk

Pandaren slaves at work during the reign of the Thunder King.

This was a great challenge, however, as, apart from those being sent to the Serpent's Spine, slaves were strictly forbidden from touching any weapon, under pain of death. Thus, Kang began to train to use his body itself as a weapon. To hide his doings from the ever-vigilant mogu, he disguised his movements as a simple artistic dance.

After perfecting these techniques, Kang displayed what he had learned to some of his fellow slaves, challenging them to attempt to strike him. None could do so, his movements allowing him to evade completely evade harm every time he was attacked. So awed were the other slaves by this new form of fighting that they begged Kang to teach them to do the same. Kang eagerly obliged and, over time, this new style of fighting spread throughout many of the pandaren in the empire, and would become known thereafter as 'the way of the monk'.

As the way of the monk began to spread, so too did the fear that the mogu, who had become aware of the emerging combat style, would soon take swift and brutal action against it. In response to this, Kang and his apprentices relocated to the peaks of Kun-Lai Summit, where they constructed a small monastery and continued their training in secret. At Kun-Lai, however, Kang discovered something entirely unexpected—the prison of Xuen, the White Tiger—who had been imprisoned by the Thunder King generations ago. Kang communed with the August Celestial who taught him of the secrets of inner strength that lay within every heart. Kang immediately passed on Xuen's teachings to the other monks. Finally, they were ready to fight.[2] 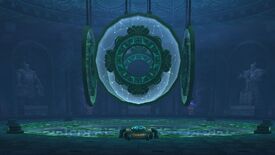 The first objective of this new, small, but determined revolution was the ancient Mogu'shan Vaults which housed the mighty Engine of Nalak'sha. There, the pandaren succeeded in driving the mogu away from the source of their flesh-shaping power. This devastatingly successful surprise attack halted the creation of any more of the mogu's twisted constructs, a significant blow to their power. In addition to boosting the morale of the pandaren monks, the victory also attracted several other enslaved races to their cause. The jinyu, grummles, hozen, and yaungol all joined the rebellion in an effort to topple the mogu empire.

Kang carried Sheilun for years, all throughout the Pandaren Revolution. The staff did not win the war. It was Kang's words that galvanized the mogu's slaves, and it was Kang's will that drove him onward when all seemed lost. To defend himself, he used Sheilun to keep the mogu's swords and axes from carving his heart from his chest.[1]

Despite desperate efforts by the mogu, the revolution began to steadily grow in size and scope, and Kang was proved correct: the mogu had become overly-reliant on their slaves. As more and more slaves rebelled, the empire fell into chaos. The sturdy Grummles, responsible for much of the empire's communications, disrupted these communications as well as mogu supply lines. The warlike Yaungol launched effective raids against imperial forces in the northwest of the empire. The crafty Hozen used their skill in digging to infiltrate even the mightiest mogu fortresses, rendering them ineffective. The wise jinyu used their abilities of communion with the water spirits to gain glimpses into the future and subsequently informed Kang where and when to attack and when to retreat. 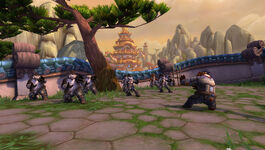 Unable to quash the revolt, Emperor Lao-Fe and his armies retreated inside the Vale of Eternal Blossoms, the royal seat of mogu power. Aware of the fact that the mogu would be able to sustain themselves in the vale indefinitely, Kang decided that the rebels would finally have to face the mogu in open battle. Thus, the multiracial alliance launched a massive assault on the vale, forcing the mogu into a decisive battle. Kang himself led the charge, even reaching the emperor himself and engaging him in hand-to-hand combat. After a brutal fight, Kang succeeded in slaying Lao-Fe, though he suffered mortal wounds himself. The remaining mogu forces soon either surrendered or fled the field.

Elated with victory, many of the now-freed slaves considered seeking revenge against the surviving mogu, slaughtering them as they had done to their slaves for generations.

Yet one of Kang's most promising students, Song, a secretive keeper of pandaren history, calmed their blood lust. Having previously memorized many of Master Kang's philosophies and tales, Song now re-told them again and again to the liberated slaves, reminding them that justice, not revenge, would prove that they could rise above senseless cruelty, as the mogu could not. This, he claimed, would be a sign of their moral strength in the face of the degenerate weaknesses and cruelties of their previous rulers.[2]

The Vale of Eternal Blossoms

After the success of the revolution, an era of prosperity began in and around the Vale of Eternal Blossoms. All the races that had now gained their freedom, established their own autonomous nations and factions and flourished with their hard-won freedom. The pandaren went on to establish their own empire but, unlike the mogu, theirs was built on the principles of justice, wisdom, and benevolence. The pandaren dedicated themselves to preserving peace among the freed races who had fought for each others' freedom. They succeeded in this regard for many years, with the races who took part in the revolution living in coexistence with each other.

A century after their success over the mogu, however, the mogu's allies, the Zandalari trolls, declared war on and attacked the embryonic pandaren civilization, thus sparking the Zandalari Troll Wars, which once more threw the pandaren's future into doubt.[2] 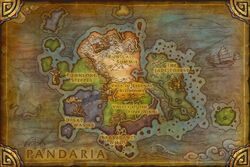 The Pandaren Revolution changed the political and social landscape of southern Kalimdor. Many of the freed races went on to pursue their own paths. This led to such events as the Yaungol Migration, where many Yaungol began to venture far north, eventually becoming the ancestors of the tauren.[2] The freedom of the numerous races under mogu control also led to an age where diverse culture flourished in the region, each race now having the freedom to practice their own individual traditions.

The Pandaren Empire, founded on the ruins of the mogu's, succeeded in maintaining peace and prosperity across the region for many years, allowing it to thrive. Its last emperor, Shaohao, was responsible shielding Pandaria from the worst of the Great Sundering, preserving much of it where other lands were decimated. In addition to these advancements, the revolution also gave birth to a new type of warrior, the monk. This new and different form of fighting was subsequently further developed and practiced throughout the coming millennia, and would still remain a major aspect of pandaren society when Pandaria was eventually rediscovered.[3]