A party (a type of group) is a collection of Player characters that can communicate amongst each other privately (see chat), share XP, and manage the distribution of loot from any mobs party members kill.

A party can only have up to 5 characters and only 1 can be the leader. The leader cannot keep a member in the party if he wants to leave but can remove a member.

In a party created by manually inviting, the leader of the party can invite new members to the party, uninvite current members to remove them from the party, or promote another party member to be leader. The leader can set the settings and quality threshold to control how loot gets distributed.

In a party created with the Dungeon Finder tool, the party leader is instead the "Party Guide", with less powers. He cannot change the loot distribution mechanism, and cannot unilaterally remove members.

As with any party member, the leader can also leave the party. In this case, another player will be chosen at random to become the new leader. 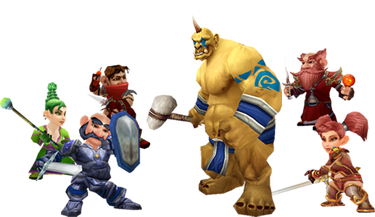 Anybody can form a party (thus becoming the leader) by inviting some who isn't already in a party.

The would be leader can invite members to a party with:

A party leader can remove (also known as "boot" or "kick") members from a party with:

A party member can remove themselves from a party with:

A party leader can make another member the leader with:

A way to increase XP gain is forming a party of three to five players (the bonus does not apply to two-man parties). A multiplied amount of XP is shared by members in the same area when a mob is defeated by a member, the factor increasing with each additional player in the party. The division of XP among party members is an unknown calculation based on the various levels of the party members, the level of the mob, and other factors.

Also see Looting While In A Party under Loot.

This section is mostly stolen from the Newbie Guide. -- Fandyllic

Looting and loot drops in World of Warcraft are fairly straightforward. If the corpse of a monster has gold sparkles on top of it, it means there's something on the corpse that you can loot. Once you loot a corpse, if you don't take everything off it, everyone else in your group will have the option to loot.

There are a few different looting types in parties called the loot level or loot option that can be set by the party leader by right-clicking on his own portrait in the upper left. Two of these types are affected by the loot quality threshold, also set by the leader (the threshold can be set to Uncommon, Rare, or Epic). If an item is equal or higher quality than the loot quality threshold, party members are given the option to Roll (from 1 - 100) to get the item or Pass.

Money loot is always shared in a party regardless of loot type. However, if a party member is out of range when a monster is killed, and so did not contribute to the kill, he will not receive a share of any gold found on a corpse and will not be able to roll for any special items found. Thus it is important not to release if you die during a boss fight, as you will not be able to loot, and you can't re-enter the instance during the fight anyway.

Free for All
Anyone can loot any item off any corpse killed by the group. First one to loot gets the item.
Round Robin
Group members take turns looting corpses as they are killed; they are allowed to loot all items from a corpse.
Master Looter
Only the designated master looter (set by the party leader by right-clicking on any member's portrait) may loot corpses first. For any item that is of the same or better type than the threshold, when the master looter attempts to loot it, he will see a dropdown list of all the party members' names. He can select a person from that list to assign the item to him.
Group Loot
This is the default type for a group. Looting takes place the same as in Round Robin looting. However, for any item that is of the same or better type than the threshold, all members in the party will get a rolling window with the item and two buttons. Party members can press the dice button to NEED roll for the item, or the gold coin to Greed roll for the item, or lastly the red X close button to pass on the item. The looting will first resolve all NEED rolls, if none then Greed rolls. The member with the highest roll will get the item automatically placed in his inventory. If all members pass the item is left on the corpse and can be looted by anyone. It is often recommended that the group set out guidelines for what to roll on and what not to roll on when using Group Loot. A general rule of thumb is to not NEED roll on something you are not going to equip as soon as pick it up.
Need Before Greed
Similar to Group Loot, only this mode follows a system of only allowing party members to roll on an item if it 'can be used' by them. There are flaws with this system, both in the code itself and with regards to limitations of the system itself. It is recommended that you use 'Group Loot' in lieu of Need Before Greed, and simply clarify to people what they should and shouldn't roll on beforehand.