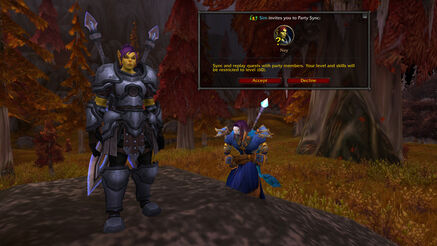 The party sync feature can be activated through the quest window frame. When the button is pressed, a invitation box appears to the rest of the party members.

Party Sync is a feature introduced in patch 8.2.5. The goal of the feature is to let players having vastly different levels still being able to group and quest together. The higher-level players can party sync in order to reduce their level to the one of the lowest-level players, play the same quests as them even if they already completed once and still get an appropriate reward. Skills, levels, abilities and systems such as Azerite traits are all adapted or disabled automatically.[1]

Replaying a quest with Party Sync may reward a