Patchwerk is a titanic abomination found in Naxxramas and is known as Kel'Thuzad's "Avatar of War.” 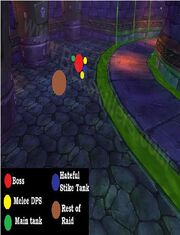 Patchwerk is not an aggro-sensitive fight, and under most circumstances, with normal threat reduction talents and effects, it is nearly impossible to pull aggro from the MT. It is however possible in some cases as shown in this video, and is probably just due to the extremely high generation of Rage on tanks due to the massive amount of damage taken. Regardless of the reason, the difficulty of pulling aggro makes it possible for the raid to all-out DPS. This is important, as Patchwerk has about 3,850,000 HP and a 7 minute enrage time limit (your raid needs ~9500 dps minimum to kill him in time).

The main part of the fight is to heal through his Hateful Strike ability; It works like this:

This fight will generally require your Hateful Strike tanks to be buffed using Flasks of the Titans and Stoneshield Potions and possibly to be specced in Protection.

Several guilds have successfully utilised feral druids as Hateful Strike tanks as they are able to attain very high damage mitigation and hitpoints, and are often able to survive Hateful Strikes without the use of Flasks and Stoneshield Potions. A druid's normal weakness, his lack of Defense to reduce crits and crushing blows, does not apply in this fight. The downside is, they are less able to avoid the Hateful Strikes due to their lack of the Parry ability. If a druid must be used for Hateful Strikes, they should have close to 75% damage mitigation or more, plenty of stamina gear, and an appropriate spec.

As noted above, the belief that aggro remains locked to the main tank is questionable, since off tanks (and insanely over-dpsing mages Mage Pulls Aggro with Insane Ignites) can become the main tank if they create too much threat. It is viable to either use one, or numerous offtanks in the fight. The best seems to be 3, it allows you plenty of time to heal up the OTs without spreading out healing too much. There is no gimmick otherwise, it's all about survival and DPS.

Note: If off tanks use

[Last Stand] or [Lifegiving Gem] they might kick someone out of rotation, however the Main Tank can use it without any risk.

3 OTs with even priority. Healers start casting only after their respective OT takes a Hateful Strike. Minimum 3.6 sec interval between Hateful Strikes assuming an OT is topped up every 3.6 sec. Due to interface lag/latency/human reaction time, it works well with low latency only. Use of addons can greatly improve the success rate of reactive healing.

Killing A Player
No more play?

Death
What happened to... Patch...

His name comes from "patchwork"; as an Abomination, he's a disgusting amalgamation of flesh, bones, meat, metal, and threads.

The Avatar of War refers to the Everquest boss of the same name. The boss had a similar ability to Hateful Strike, in that it would unleash massive damage to the tank, that would have to be healed through. It was widely believed at the time that no player could possibly tank that.