Path of the Titans (feature)

For the subzone bisecting Dragonblight, see Path of the Titans. For the garrison mission, see

Path of the Titans.

The glyph interface of a player following in the path of Golganneth. 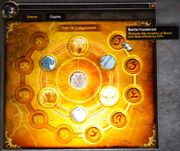 Prior to its cancellation, Path of the Titans was a system of character progression which was planned to be introduced in Cataclysm that players would have been able to take once they have reached level 85. The feature was announced to be cancelled at the Cataclysm press event on the 8th of June 2010.

Players could earn progress down any of these paths by doing things such as questing, raiding, PvP, trade skills, etc., with a possible weekly cap for maximum progress. Over time, characters would be able to unlock new ancient glyphs that will greatly benefit them. Each path consisted of 10 ranks, with ten slots numbered from I to X; at each rank players would be presented with a selection of two to three different ancient glyphs from which to fill the slot. This system was designed to provide a 20% character-power increase over the course of the expansion and would be compatible with dual specialization.[1]

Players earned these ancient glyphs by using the archaeology profession to recover and trade in titan artifacts. Respeccing would be possible should players decide to go down another path. Some possible paths were:[2]

Some examples for ancient glyphs available through the Path of Golganneth include:

With Deathwing's return triggering the Cataclysm and wracking the land with disaster, the denizens of Azeroth found themselves in a time of great upheaval. That, coupled with recent discoveries unearthed in Ulduar regarding the Titans, has caused a number of cults to spring up, following in the paths of the Titans in order to obtain new powers.