Pathaleon the Calculator is the last boss of the Mechanar, which is one of the satellite structures of Tempest Keep. He is the mouthpiece of his demon-crazed master, Kael'thas Sunstrider. He is the head of all the blood elves' devious schemes and has been connected thus far with the massive red crystal at Fallen Sky Ridge in the west of Hellfire Peninsula and a mysterious scheme dubbed "Project at Firewing Point". He is also Kael'thas' personal envoy between the Manaforges in the Netherstorm.[1]

He is one of the many blood elves that followed Kael'thas to Outland and joined Illidan, until they defected from him for the Burning Legion.

Kael'thas left a huge red crystal at Fallen Sky Ridge as an experiment, which caused the creation of the colossi and threatened the security of the zone. Pathaleon oversaw that experiment, but the Cenarion Expedition sent adventurers to destroy the colossi[2] and then to heal the land. Pathaleon called to Goliathon to defeat the intruders but the king of the colossi was defeated.[3][4]

Although this experiment was a failure, he continued with the project at Firewing Point, and as a vengeance to the druids he exploded a prototype of a mana bomb in the Cenarion Thicket. However, the Horde and Alliance sent adventurers that destroyed his plans and exploded the proper mana bomb within Firewing Point.[5][6]

After the failure he continued overseeing the Manaforges. He gave orders to Commander Dawnforge and Arcanist Ardonis and then kept attention to his matters in Tempest Keep. The Manaforges were then destroyed by the Aldor and Scryers.[7][8]

Following the Sunwell's defilement, the vainglorious arcanist Pathaleon saw an opportunity to gain renown by aiding Kael'thas in finding a cure for his race's addiction to magic. This single-minded quest led him to join the blood elf prince on Outland and oversee his disastrous experiments. Most recently, Pathaleon has begun harnessing the Tempest Keep's otherworldly technologies in pursuit of fame and power.

Prior to the fight

On the way to Pathaleon, groups must first clear 6 waves of adds in a scripted event. The first 3 waves come one after another. The second set of 3 (reverse sequence to the first) comes only when the group moves further along the path towards Pathaleon. Once the last mob in the 6th wave is killed, Pathaleon will spawn and give the group a short time to rest before engaging.

It is a good idea to keep one of the guys with fire shield sheeped until everyone has regained full HP/mana, then kill that mob. If you have a mage, spellsteal the fire shield, and use it on the adds in the boss fight.

Pathaleon spawns 3 elemental adds every 30–45 seconds, which cast arcane missiles. Like most blood elves, he has a single target mana drain ability called mana tap, which puts a corresponding mana tap buff on him - it can be purged or spellstolen. Regardless of the number of mana taps on him, he will occasionally cast arcane torrent, an AoE silence effect - it has a short duration, and can largely be ignored. Pathaleon will also occasionally mind control a random player for 12 seconds. 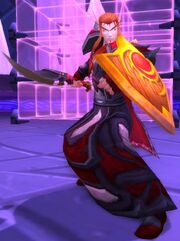 Waves of Adds Before the Boss

The first set of 3 waves consist of a wave of 4 blood elves, followed by a solo robot, followed by another wave of 3 blood elves. The first set will spawn once one person has stepped just beyond the boundary of the door from Nethermancer Sepethrea's room onto the bridge. The leader probably will not have enough time to mark when the groups of blood elves spawn, so it maybe easier just to randomly CC any two mobs and have the tank quickly pick up the remaining one or two. Alternately, the whole group can run down the elevator after the mobs spawn, so that they can be marked as usual when come back. You will be removed from combat for a brief moment after the last mob in a wave has been killed, so capitalize upon this to recover mana by drinking. If the healer is low on mana, or anyone is killed, the group can always run down the elevator to get out of combat.

After the first 3 waves have been killed, rest to full health and mana, and have one person run down the bridge until the next set of mobs spawn. It's best to engage the second set of waves in Nethermancer Septhera's room, as this will increase the amount of time the group has to rest between waves. On the 6th wave, keep one mob crowd controlled (preferably a Sunseeker Astromage) and allow the group's mana to regenerate to full. If possible, spellsteal the Astromage's fire shield. Once you are confident you have enough mana, move down the bridge. Allow the last mob to come to your group, and kill it. Pathaleon will aggro upon its death.

The best place to fight Pathaleon is in his room at the end of the walkway. The first thing to note is that he will spawn the 3 arcane elementals every 30–45 seconds. They have a decent amount of hit points and the arcane missiles hit for about 800. They will all despawn when the Pathaleon is down to 20% health. Another thing to watch for is that Pathaleon will mind control the second person in proximity to him frequently. This player will be mind controlled for about 8–10 seconds, during that time heal the boss or attack party members. A good way to handle this, is to crowd-control the mind-controlled player and dispel it afterward if possible. Other than that, he will melee the main tank and does not hit incredibly hard.

The Domination mind control can be broken with the PvP trinket (on Heroic as well).

Handling the adds is probably the hardest part of this fight. Many strategies are possible. Make sure everyone understand what the plan is before starting the fight. The more commonly used ones are listed here:

Fear strategy
This is the safest method for a group with two or three players that can fear (warrior, priest, warlock). Assign a fear rotation before start and try to keep the adds chain-feared. Everyone else focus fire on Pathaleon to bring down his health as quickly as possible. The adds despawn when Pathaleon reaches 20%. 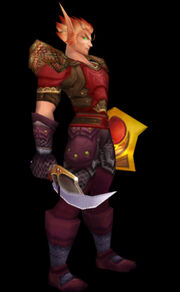 The old model of Pathaleon.

With a reasonably geared and skilled tank and good healer, this becomes a very straight-forward fight. The tank can put on some pieces of crafted arcane resist gear (enchanted clefthoof / enchanted adamantite sets) but this is not strictly necessary. When the adds spawn, he should grab all of them with AOE abilities. Paladin tanks can do this easily but warrior or druid tanks with good skill should be able to do this too. All DPS focus fire on Pathaleon and ignore the adds. Healer should be ready to throw out big heal on the tank when the adds spawn. If everything is done correctly, the boss will be down to 20% within a short time, so mana should not be an issue to the healer.

This is a possible strategy if the above three methods are not practical for the group. Full out DPS on the boss until the first wave of adds appear. At that point, all DPS turn to the adds, killing them one by one. When all the adds are dead, focus fire on the boss again. Repeat for the next few waves until the boss is down to 20% and the adds despawn. This method takes a much longer time than the other three strategies and require the group to have good DPS and healing to work. It is not recommended if the other strategies are possible.

After downing the boss to 20% with either of the above strategy, continue dps him and he should be dead in no time.

This fight is naturally more difficult than normal mode. In addition to his normal abilities, Pathaleon now has an arcane explosion with a two second cast time that hits for around 2000 damage. It is possible for all but the tank and melee to avoid it, and it appears to have a 10 second cooldown. (This AoE is interruptible. A rogue can Kick, or a warrior can Shield Bash it while in progress. Also, Pathaleon is susceptible to mind numbing poison, which will give you a touch more time to kick the arcane explosion.)

It's worth noting that the spawned elementals have more HP than in normal, and it is much more difficult to bring them down. Therefore, the two adds killing strategies are less practical in heroic.

Pathaleon appears near the red crystal in Hellfire Peninsula

Spawn
I have been waiting for you!

Aggro (25 secs after spawn)
We are on a strict timetable. You will not interfere!

Switching weapons
I prefer to be hands-on...

Low on health
A minor inconvenience.

Death
The project will... continue.

Time to supplement my workforce.

For the quotes of Pathaleon the Calculator's Image see his article.