Peasants are the laborers, workers and lumberjacks of the Alliance and the human nations. Their work is of the greatest importance to fuel the human armies and this is why the importance of the peasants is recognized in the holiday Peon Day.

Peasants appeared as units on the human or Alliance side in Warcraft I, Warcraft II, and Warcraft III. They are the classic counterpart to peons.

These were the people of the Kingdom of Azeroth. Being of sturdy and hardworking stock, they harvested the forests for necessary woods, or mined for gold in the hillsides as needed. Often times they gathered in the Town Hall, and there was always a large supply of them willing to assist in the fight against the Orcs. They were also skilled craftsmen, able to construct any type of building one could desire. They were unskilled in the ways of war, however, and would flee when engaged by the enemy, often ignoring a safer route for a faster one.[1]

Peasants were trained from the hard-working and stout-hearted citizens that lived in the numerous kingdoms of Lordaeron. By mining gold and harvesting lumber to meet the ever-increasing needs of the fighting force which had to push back the unrelenting Horde, they were the backbone of the Alliance. Trained not only in the construction and maintenance of the myriad buildings found in every community, but also those necessary to wage war, they took great pride in the invaluable service they provided. Roused by tales of the orcish atrocities in Stormwind, these peasants had learned to use both pick and axe for their own defense if threatened.[2]

During the Second War, troubles arose in Tyr's Hand when the local peasant population fell into a state of minor revolt.[3]

Peasants are trained from the hard-working and stout-hearted citizens that live in the numerous kingdoms of Lordaeron. By mining Gold and harvesting Lumber to meet the ever-increasing needs of the fighting force which must push back the unrelenting Horde, they are the backbone of the Alliance. Trained not only in the construction and maintenance of the myriad buildings found in every community, but also those necessary to wage war, they take great pride in the invaluable service they provide. Roused by the tales of the Orcish atrocities in Azeroth, these Peasants have learned to use both pick and axe for their own defenses if threatened.

Peasants of the Third War are a courageous lot and can be converted into militia when the Call to Arms is sounded.

The man standing before you is clearly a peasant, dressed in nothing more than dirty, torn shirt and ragged pants. He wears black boots and his head is bare, though he does have a threadbare cloak to ward off the night chill. He carries a mining pick over one shoulder and a burlap sack over the other.

No matter how loudly a knight might boast of his deeds, the truth is that no army could survive, much less win, without peasants. These lowly men, armed with little more than staves and clubs or picks and axes, and often completely unarmored, are the force that allows an army to function. Peasants have no desire to fight, and only attack when forced or when terrified. In battle they forget all discipline and simply charge, waving their picks and shouting incoherently.[4] 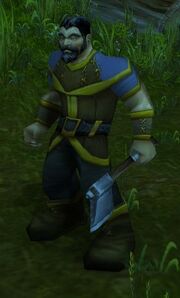 Peasant from World of Warcraft.

Peasants can still be seen working in many human settlements all over Azeroth, Outland and Draenor. Most of them have a unique model, more reminiscent of their equivalent in Warcraft III than of other humans in World of Warcraft, but this tend to not be true anymore as since the Player character revamp new peasants are now using a normal human model. Most peasants still have the same soundset and quotes as in Warcraft III though, and that is usually true even for new peasants with a normal human model.

Peasants can also be classified as lumberjacks, miners, farmers, workers or laborers.