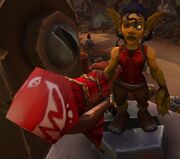 Penny Clobberbottom is a goblin quest giver located at the Beastwatch in Gorgrond. Penny eventually becomes a follower in commander's Garrison.

Later, Gazlowe called her to come to Mechagon Island to assist in rescuing of mechagnomes.

So this whole fight club thing just isn't my style. I'm more of a rip the trees down with a homemade giant mechanical monster kind of gal.

If you change your mind later, come talk to me and I can flip this fight club out of your way and replace it with a nice big rompin' lumber camp! Complete with its own shredder!

Of course, that ain't gonna be cheap.

Build the Lumber Yard instead.