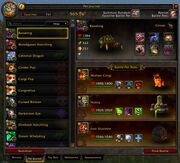 The Pet Journal in Mists of Pandaria

The Pet Journal is a window tab found in the Collections interface. It provides listings and details concerning non-combat pets both collected and not collected, as well as allowing players to queue for pet battles as part of the Pet Battle System. It also provides access to the

[Revive Battle Pets] ability, as well as the 'Summon' button used to select a particular pet to be the player's in-game companion.

The left-most pane provides a list of all pets (both collected and not collected), with a search function and a choice of filters.

The top-right pane displays the stats and abilities and other information on any pet which is dragged to that pane.

The bottom-right pane consists of three Battle Pet Slots. Dragging a pet to one of these slots will make it part of your current battle pet team, replacing any pet previously occupying that slot. Each Battle Pet Slot displays a review of the pet, showing the pet's name, type, abilities, level, health and experience. Pets' abilities can also be chosen in this pane. Pets will be displayed in-combat in the order of the slots that they occupy; when battling wild pets, the pet in the first slot will always open combat.

At the bottom-left of the window is the 'Summon' button, allowing a pet to be summoned as the player's in-game companion. At the top-right can be found the

[Revive Battle Pets] ability, while at the bottom-right is the 'Find Battle' button, queueing the player for a PvP pet battle match against another player with a reasonably similar team of pets.

The window also displays the total number of pets owned by the player, and the player's total Battle Pet Achievements score.

For a listing of all known pets see the list of companions.

To summon a random pet from the journal, use

To summon a random favourite pet, use

To summon a specific pet by name (works with either a given name or the default name), use