Phoenixes are powerful, bird-like fire elementals summoned by mages. They burn with such intensity that they damage both themselves and nearby enemies. When a phoenix dies, it creates an egg that will hatch into a new phoenix.[1] The phoenix is the most powerful spell able to be cast by a potent blood mage.

While fire hatchings are born from the ashes of a phoenix, dark hatchlings emerge from their shadows.[2] Phoenixes grow slowly.[3]

Al'ar the Phoenix God in the Eye.

Phoenixes are encountered as wild creatures in Durotar in the The Founding of Durotar campaign.

The phoenix is a natural predator of the Elemental Plane. The wondrous bird is about 18 feet long with a sleek, feathered body that dances with bright flames. Its colorful feathers range from yellow to orange to red. A crest of spiky feathers runs down the center of its back, and its wingspan stretches out 30 feet. From birth to death, it spends its life hunting through the air - in fact, it lacks any legs that might enable it to land. Even after death it often rises again from its own ashes to continue the hunt.

The phoenix is a fearless, aggressive predator of aerial prey. Its only direct form is a vicious bite, but the secondary damage from its flaming aura and ability to burn help to bring down its prey quickly. A phoenix prefers to attack from above and behind with surprise, but follows up its initial attack by remaining close to burn its victims while continuing to strike with its beak.[4] 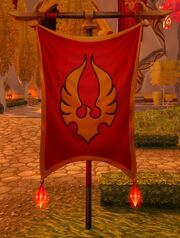 The phoenix as depicted on the blood elves' banners.