This article is about the lore of the Pillars on Azeroth. For the related achievement, see

[Pillars of Creation]. For the eponymous quest, see

[110R] Pillars of Creation. For the Gorgrond object, see Pillar of Creation (Gorgrond). 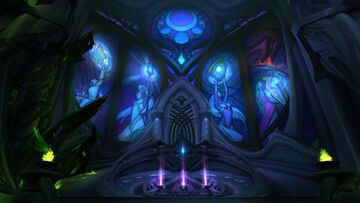 Stained glass window within the Tomb of Sargeras depicting the Highborne with the Pillars of Creation.

The Pillars of Creation are relics created by and named after the members of the titan Pantheon that were gifted to the titan-forged Keepers so they could shape the world of Azeroth when it was young.

During Azeroth's ordering, the Pantheon bestowed the Pillars of Creation to the titanic keepers to aid them with that colossal task. Ages after the keepers had completed their work, the Pillars would become lost and scattered across the lands of Azeroth.[1]

After the Highborne found the Pillars while hunting artifacts throughout ancient Kalimdor, they guarded them in the Vault of Antiquities in Suramar. During the War of the Ancients, the Burning Legion attempted to attack the kaldorei on two fronts. As such, they opened a secondary portal, besides the one at the Well of Eternity, inside the Temple of Elune of Suramar. The Highborne led by Grand Magistrix Elisande and opposing Queen Azshara used the Pillars of Creation to close the portal and put several seals on the Temple.[2] After their success, the Pillars were subsequently scattered across the land that would become the Broken Isles.

Ten millennia later during the third invasion of the Burning Legion, the orders and Dalaran managed to retrieve and stored them within the Portrait Room in the city of Dalaran. The Armies of Legionfall kept progressing towards the Tomb of Sargeras on the Broken Shore, eventually breaching into the Tomb. Within the massive temple, each of the Pillars was placed in a particular slot and were used to seal off the Legion's portal once again and the entire Tomb with it.[3][4]

Magni the Speaker said the Pillars couldn't be used to draw out the corrupting energies from the sword of Sargeras in the Wound of Silithus because the Pillars were needed to keep the Tomb sealed. Instead the champions of Azeroth used their artifact weapons.[4]

At some point before or during the Fourth War, Queen Azshara managed to steal the unguarded Tidestone of Golganneth. This could imply the other Pillars were also taken thus leaving the Tomb unsealed.