Plague Deviser Marileth is a prominent necromancer of the House of Plagues. He was a close confidant of Margrave Stradama but was driven insane by the fallout of his house's destruction and mistakenly believes adventurers to be his apprentice.

Marileth serves as a quest giver in the Maldraxxus storyline and is one of the soulbinds available to adventurers of the Necrolord Covenant.

Marileth has known many soulbinds, but the foremost of them all was Margrave Stradama herself.[1] After the Primus's disappearance and the beginning of the anima drought, the latter of which caused the House of Plagues' work to stagnate, Stradama confided her fears in Marileth. The House of Rituals offered to provide the House of Plagues with anima and sent the necromancer Korrim the Cunning to assist in their experiments. Stradama and Marileth both suspected duplicity, but their house was in no position to refuse. As a last resort, Marileth devised a potion to protect his margrave if the need arose. Before he could craft it, however, the House of Plagues was annihilated. The disaster caused Marileth to lose his mind, but he held onto his mission of crafting the potion for his margrave.[2][3]

When Baroness Draka sent a Maw Walker to search for survivors from the House of Plagues, they found Marileth at his camp in the Blighted Scar. He mistook the outsider for his apprentice and enlisted them to help him finish his potion, as well as create a slime companion of their own.[4][5] Marileth then relocated to his laboratory near Plague Watch, where he and his "pupil" worked together to concoct the potion. Margrave Stradama—now driven mad and transformed into a monstrous slime being—appeared shortly after, but the potion succeeded in granting her and Marileth a brief moment of lucidity. Marileth was shocked at Stradama's fate, but the margrave told her "dear Marileth" that he had to forgive himself and that while she was lost, he had to endure. The margrave disappeared and Marileth promised that he would endure for her sake. Moments later, the effects of the potion wore off and he returned to his mad state, but the act of temporarily clearing Stradama and Marileth's minds awakened the Rune of Insight on the Blade of the Primus carried by the Maw Walker.[6] Upon spotting his "apprentice" again, Marileth agreed to help them with their own "project"—unlocking the Seat of the Primus.[7]

Along with his pet slimes Kevin and Plaguey, Marileth helped defend the Seat when it was attacked by the forces of Baron Vyraz.[8] After the Seat was opened, he relocated inside with his slimes and allowed Koa and Kou—two stewards rescued from the House of Constructs by the Maw Walker—to ride around on Plaguey and Bloop.[9]

In the Covenant Sanctum version of the Seat of the Primus, Marileth and his slimes can be found in the laboratory in the northwestern part of the fortress. The plague deviser volunteered to teach Maw Walkers who joined the Necrolord Covenant about the process of soulbinding[10] by binding his soul to theirs.[1] Marileth and Bonesmith Heirmir later helped defend the Seat by equipping Ragewing with a few "surprises" (plague vials and runed spears) which Maw Walkers could throw at the traitorous Necrolord forces besieging the Seat.[11] 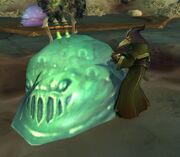 Marileth and Kevin defending the Seat of the Primus.

Marileth and his slimes inside the Seat of the Primus.

On approach in the Plague Watch if part of the Venthyr Covenant and are a Friend or higher
Be careful not to step in my latest experiment, <name>. I'd hate to lose you.

Blighted Scar
My apprentice! You return!

Your "apprentice"? What are you talking about?

Now, my apprentice, there is no need for humility. You must have more confidence in yourself!

You are my brightest, most devoted student. I would be remiss not to cultivate such talent with individual instruction!

I was just wondering where you had gone. We still need to complete our potion for Margrave Stradama! She'll surely be eager to see your progress.

Your potion turned the Lich champion into a slime! (becomes available after completing

I don't know what you expected.

You asked for a potion of ultimate power--what is more powerful than a slime?!

Slimes have no nervous system to feel pain, no muscles to ache or atrophy, no heart to break at the loss of your House and friends...

And sometimes, they're corrosive! Most powerful, indeed!

Seat of the Primus after

[54] The Door to the Unknown
My apprentice! So good to see you. I owe you thanks for your assistance with my field research today!

I can't place it, but something feels different now... it's as if a great weight has been lifted from the shoulders of Maldraxxus.

Perhaps I'm simply happy that our visitors from Bastion have befriended the dear slimes!

Though I can't recall which slimes were corrosive... Hm.

In the Plague Watch if part of the Venthyr Covenant and are a Friend or higher
There's my favorite former-apprentice-turned-court-host!

I have been dying to share a few ideas I had for the next Ember Court.

Fair warning: they all involve excessive amounts of slime.

Some of the slimes, however, are also delicious!