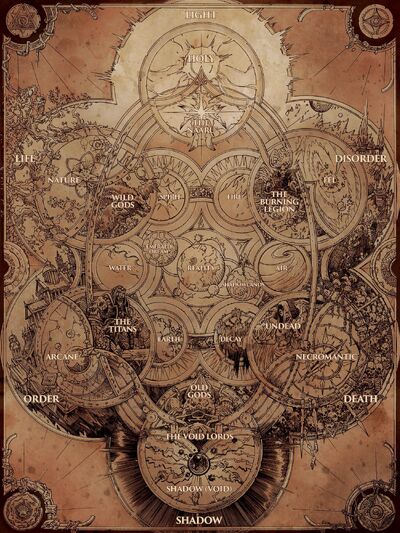 The cosmic forces, some of the main realms and the denizens of the universe.

Planes, also known as dimensions,[1] realms of existence[2] or simply realms, are cosmic regions within the Warcraft universe. Besides reality and its physical realm, six cosmic forces form the universe. All these forces push and pull against one another in an unending tug of war, constantly vying for power over each other. If one fell, all worlds would fall into chaos.[3][4]

The multiverse is a term used to refer to all the possible universes in World of Warcraft.[5][6]

The Great Dark Beyond represents the mortal and the physical universe. It is an infinite living realm composed of innumerable stars, worlds, moons, and mortal civilizations. Azeroth is found in it, and it is merely one of the countless worlds drifting through vast reaches of the Great Dark.[2][7]

The physical world is referred to as the material world or corporeal realm[8] and is in contrast with the realm of spirits.[9][10][11][12]

The Twisting Nether is the astral plane between worlds that lies in parallel with the Great Dark Beyond. The forces of Light and Void bleed together at its boundaries, engulfing the Twisting Nether in perpetual strife. Sometimes, the volatile energies that pervade the Nether intrude upon the physical universe, warping reality beyond measure.[2]

The Emerald Dream is an ethereal realm of spirits and untamed nature that exists alongside Azeroth. The titanic keepers forged it to act as a map for the evolutionary path of Azeroth's flora and fauna. As life ebbs and flows across the physical world, the spiritual energies that stature the Dream keep pace with it.[2]

The Shadowlands are nightmarish realms of decay, labyrinthine spiritual planes teeming with the souls of the dead who have passed from the world of the living. They have existed ever since mortal life arose in the physical universe.[2] Its main realms are Ardenweald, Bastion, Maldraxxus, Revendreth, and the Maw.

Pure Light and Shadow dwell in a realm outside the borders of reality, but shades of their presence are found in the physical universe as well as engulf the Twisting Nether in perpetual chaos. Light and Shadow are the most fundamental cosmic forces in existence predating the physical universe. Although contradictory in nature, they are bound together on a cosmic scale as one cannot exist without the other.[13] The Void realm is visited in alternate Draenor and on Argus.

Ny'alotha is a realm inhabited by the Old Gods and their minions. It is separated from the physical world by a thin veil.[14]

Pocket dimensions[15][16] (or dimensional pockets)[17] seem to be little parts of a dimension secluded by magic.

The Elemental Plane is the home of all elementals that were removed from Azeroth when the titan-forged Ra and Helya created four interlinked domains within a pocket dimension, imprisoning them millennia ago.[18]

Halls of Valor and Helheim

Helya called upon the same powers she had used to secure the Elemental Plane and sealed off Odyn's fortress—the Halls of Valor—with an impregnable, magical barrier. She then proceeded to create Helheim as an enchanted refuge for herself and the other Val'kyr far below the Halls.[19]

Main article: Other Side

De Other Side is Bwonsamdi's pocket dimension in the Shadowlands.

These realms exist but there is not much known about them:

Planes for all the cosmic forces?

As the Shadowlands is the cosmic realm of Death there could be realms for the other cosmic forces. There are some hints to that possibility: