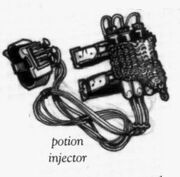 A potion injector is a device that straps around the upper arm of the wearer, with a cable running down to a control box worn around the wrist. Vials of potion can be mounted on clamps around its exterior, their stoppers replaced with corks and tubes running into the device. When a stud is pressed on the control box, the potion held in the indicated slot is immediately injected into the wearer of the device. In all but a few rare cases, this injection has the same effect as swallowing the potion, and its effects take place normally.[1]