Prince Valanar is the Scourge overlord of the Borean Tundra. He rules from Naxxanar, a Scourge necropolis above the Temple City of En'kilah in the northern edge of the Tundra.

Valanar can also be found in Valiance Keep disguised as Counselor Talbot, manipulating the Alliance leadership in order to weaken it. This is not revealed until the quest

He is also shown in a vision for the quest

[75] Out of Body Experience, where he and three other San'layn resurrect Archmage Arugal from the dead. 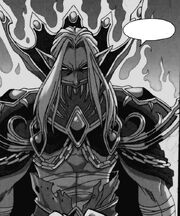 All this time he was disguised as Counselor Talbot, ready to lead the Alliance forces in the hands of the Lich King. He was stopped by Thassarian.

Valanar, along with his brother Keleseth and Prince Taldaram from Ahn'kahet, have returned in Icecrown Citadel as members of the Blood Prince Council. The three princes were raised in undeath by the Lich King to avenge themselves upon their slayers and to act as bodyguards for Blood-Queen Lana'thel, the blood-queen of the San'layn. They were unsuccessful and defeated once again.[3]

His line "Naxxanar was merely a setback!" is a tribute to the oft-paraphrased line delivered by Kael'thas in Magister's Terrace.

Valanar is involved in the following quests at Death's Breach:

His death is necessary for the following quests:

The Scarlet Crusade will serve a new master - in death... 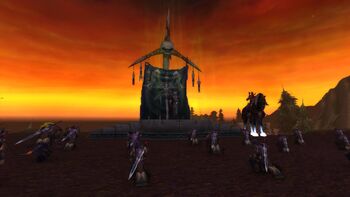 Open your eyes, brothers and sisters! GAZE UPON APOCALYPSE!
The sky itself feeds upon the suffering of the conquered!
The Scarlet Crusade is powerless to stop us!
The corpses of those that try only serve to feed our expanding host!
The Scarlet fleet lies in ruin upon the sundered coast!
With each enemy slain, our strength grows! We mustn't relent!
The Lich King has spoken to each of you! Let his words resonate among you once more!
ALL. MUST. DIE.
Leave no survivors in your wake, brothers and sisters!
No mercy for the weak!
TERROR!
CHAOS!
DESTRUCTION!
With the approaching darkness comes the end of the Scarlet Crusade. You will battle once more! For the Scourge! For the Lich King!
SUFFER WELL, DEATH KNIGHTS!