Princess Huhuran is a large silithid wasp, and the fourth boss of the Temple of Ahn'Qiraj. Defeating her requires very high amounts of nature resistance on all players. 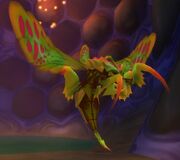 It is important to note that hunter and warlock pets DO NOT count as part of the closest 15 in absorbing the poison volley, only the AoE sleep effect. For example, if you have 6 warriors, 6 rogues, and 3 combat pets attacking Huhuran in melee range, and the next 3 closest players are hunters, the warriors, rogues, and pets will take the Wyvern Sting effect (some combination of 10 of them) but the warriors, rogues, and hunters will be hit by the poison volley, as Huhuran will not target pets with it.