Free the Prisoners of War locked up in the prison in Render's Valley.

The Bravo Company field kit is ready, <name>. I'm gonna equip you with it and you're gonna enter Render's Valley, southeast of here, and free our P.O.W.s. I'm sending Jorgensen with you to watch your back.

Now the prisoners are being held on the northeast side of the valley in a large cage, but the key to the cage is in a cave on the south side of the valley. You'll have to steal the key, create a distraction, and free the citizens.

Good luck, <name>! I'll be in touch through the field kit.

<The radio on the Bravo Company field kit crackles.>

Looks like the P.O.W.s are free. Time to initiate Operation: End All. 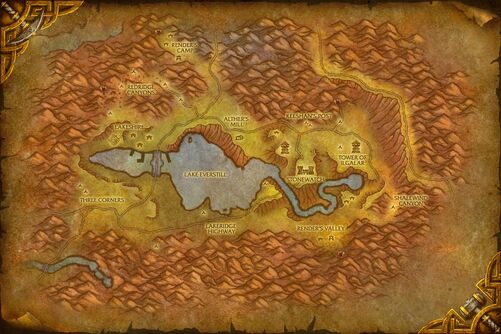 Accepting the quest brings Jorgansen back as a guardian. Also, players now have the field kit with them. Toggle it to bring out its abilities and a quick explanation:

Players are also buffed with "Bravo Company Field Kit: Toggle to deactivate", which they can right-click off if necessary.

Leaving camp headed toward the valley

Closing in on Render's Valley:

We're nearing Render's Valley. These orcs are rough. Make sure you are camo'd!

The orcs are all elites, so fighting them is an ill-advised idea. However...

Create a distraction so that you and Jorgensen can slip by unnoticed.

Done properly, nothing untoward happens. However, Blackrock Guards can cast truesight, which sees through stealth, so be careful!

In the cave is a solitary guard.

Sometimes you just need to take out one target. Use chloroform while behind the enemy!

After looting the key, head northeast to the other end of the valley to find the Blackrock Holding Pens. Make a distraction to keep the orcs busy then free a pen.

The citizens should have enough time to get away if the span between distracting and freeing was short.

Jorgansen has some useful advice:

And some standard paladin bitching: