This battle is far from over, <name>. If our people are still alive inside that village, someone has to go and get 'em.

<Vice Admiral Keller nods at you.>

Head north and enter Wyrmskull Village. Once there, look for our people. If they are imprisoned you'll need to find a way to break them out.

Maybe they'll have some more information about what it is that we're actually fighting.

Put some backbone into it, <name>! People's lives are at stake here!

Those soldiers you rescued had a good bit of information for us. These monsters call themselves 'vrykul.' The tribe that's taken up Wyrmskull Village is led by a mystic named Yanis who himself is an underling of another vrykul named Ingvar the Plunderer. 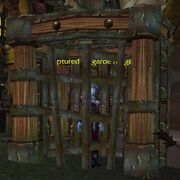 Rescuing a prisoner will temporarily add him or her to your party. If you are in an actual party, occasionally the NPC will say in party chat "I hear they're sacrificing prisoners up at their ritual grounds. I think the place is called Gjalerbron...".

Any of the following NPCs qualify: