The subject of this article or section was part of the Elemental Unrest, a world event that heralded the beginning of the earth-shattering Cataclysm.

Listen to a speech given by a Doomsayer in the Drag and obtain copies of the pamphlets "Elemental Fire for the Soul", "What Does 'The End of All Things' Mean for Me?", and "Finding Security and Comfort in a Doomed World".

Harbingers of doom are nothing new on the streets of Orgrimmar, but I'm worried about this latest batch. These people are organized and they've attracted a lot of attention in the Drag, where they seem to congregate.

I've thought about rounding them up or otherwise disrupting their activities, but that will just drive them underground. We need to find out as much as we can about them. Would you go to the Drag, listen to what these doomsayers are spreading, and gather any literature you can find about their ideas?

Well, did you find out anything?

<Torek reads over the scrolls you collected.>

Whoever these people are, they really mean to gain a following. It looks like they're having quite a bit of success. They can't be allowed to incite the citizens of Orgrimmar to panic and hysteria. We must discourage interest in this group and learn as much about it as we can.

Head to the Drag and start looking around. Doomspeakers are all over, but the ones marked on the map have scrolls near them. 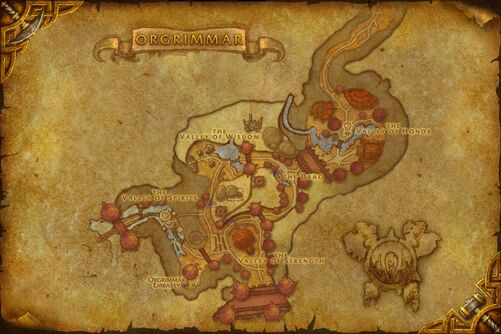